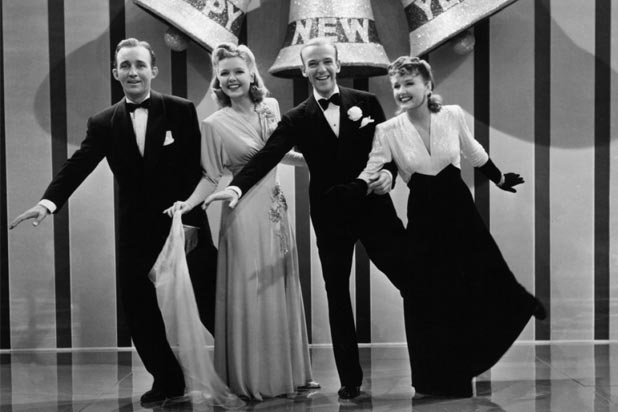 The classic 1941 Hollywood musical “Holiday Inn” is coming to Broadway.

Roundabout Theatre Company, in association with Universal Stage Productions, on Thursday announced plans to mount an adaptation of the Bing Crosby-Fred Astaire classic in fall 2016.

The new musical will feature 20 songs from the entire Irving Berlin catalog — including “Steppin’ Out With My Baby,” “Shaking the Blues Away,” “Easter Parade,” “Cheek to Cheek” and “Heatwave.” — and a new book by Gordon Greenberg and Chad Hodge inspired by the Oscar-winning movie. (We’re guessing the movie’s notorious blackface number will be omitted.)

Previews will begin September 1, 2016 at Roundabout’s Studio 54 venue, with an official opening set for October 13.

Director Gordon Greenberg and choreographer Denis Jones, who oversaw the world premiere of the new production in 2014 at Connecticut’s Goodspeed Opera House, will have those same duties for the Roundabout.

“Holiday Inn, The New Irving Berlin Musical” tells the story of Jim, who leaves the bright lights of show business behind to settle down on his farmhouse in Connecticut. He quickly discovers life isn’t the same without a bit of song and dance. Jim’s luck takes a spectacular turn when he meets Linda, a spirited schoolteacher with talent to spare.

Together they turn the farmhouse into a fabulous inn with dazzling performances to celebrate each holiday, from Thanksgiving to the Fourth of July. But when Jim’s best friend Ted tries to lure Linda away to be his new dance partner in Hollywood, will Jim be able to salvage his latest chance at love?

Casting and additional creative team will be announced at a later date.

“I went to see a workshop of ‘Holiday Inn’ with no idea what to expect and left with a huge smile on my face,” Roundabout Artistic Director Todd Haimes said in a statement. “The energy and joy of this show are just infectious. With a great new libretto and show-stopping choreography, the show has a wonderful freshness, yet those timeless Irving Berlin songs also make it feel like a classic.”