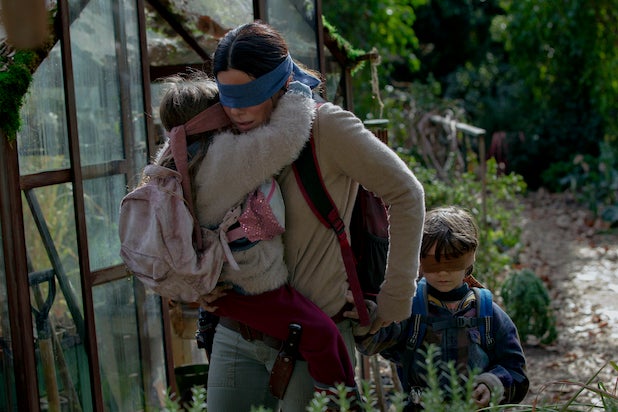 Netflix claims that over 45 million people saw “Bird Box” in its first week on the streaming platform, but not one of them actually “saw” the monsters that terrorized Sandra Bullock in the film.

Well on Saturday, special effects artist Andy Bergholtz shared some photos on Instagram of what those monsters were supposed to look like, saying that a nightmare sequence in which they appeared to Bullock’s character was ultimately cut from the film.

Bergholtz shared several photos of a veiny, cragged, baby face, which he said was meant to play into Bullock’s fears as an expectant mother at the start of the film.

“Considering her pregnant state and emotional arc thru the movie, the producers felt Sandra’s nightmare would have something to do with a twisted, demonic baby creature attacking her (that’s as much as I could gather about the context of the scene anyway),” Bergholtz said on Instagram. “I sculpted at least three or four variations on the design before it was approved, which began as a more aggressive, monstery look and was revised to be a bit more subtle in the end.”

Bergholtz, who additionally did the special effects for the similar “A Quiet Place,” also clarified that most likely, the monsters would be different for each person, as the visions that cause people to kill themselves each play on the individual’s worse fears. He also dispelled previous reports that said the monsters would look like a “snake-like green man, clarifying that an actor in a spandex green-screen suit was intended to be a giant CGI creature with a monstrous body to be added later.

Still, he wasn’t too disappointed that his creations never made it to screen.

“In the end, I actually really liked the movie and think it was better off NOT showing the makeup,” Bergholtz said. “Kudos to the director for sticking to her guns on that one.”

See the photos below. “Bird Box” is available for streaming on Netflix now.

*Some spoilers ahead for BIRD BOX, continue reading at your own risk!* We had the unique pleasure of designing a creepy makeup for the film, although the scene ultimately ended up on the cutting room floor. Keep in mind, the fatal "vision" that each character saw would most likely be different for each person (you'll understand if you've seen the film), and this makeup appeared in a cut "dream/nightmare sequence" with Sandra Bullock's character. Considering her pregnant state and emotional arc thru the movie, the producers felt Sandra's nightmare would have something to do with a twisted, demonic baby creature attacking her (that's as much as I could gather about the context of the scene anyway). I sculpted at least 3 or 4 variations on the design before it was approved, which began as a more aggressive, monstery look and was revised to be a bit more subtle in the end. I also had the pleasure of painting the finished prosthetics before sending them to set, to be worn and performed by the one and only Dirk Rogers @thehalloweendirk, applied by the great @proutyfx. It's funny, I read an interview recently where Bullock described the creature as a "snake-like, green man with a horrific baby face". Many folks have speculated what the creature may have looked like, but they fail to realize the "snake-like green man" portion was simply Dirk in a spandex green-screen suit ????. Everything from the neck down was intended to be a giant CGI creature/body added later. In the end, I actually really liked the movie and think it was better off NOT showing the makeup. Kudos to the director for sticking to her guns on that one. Still a fun project to be a part of, thanks Howie! @hoops511 #netflix #birdbox

The unseen creature from Bird Box created at @knb_efx that was sadly cut from the final film. Andy Bergholtz @andy_bergholtz sculpted and pre-painted the prosthetics. Stephen Prouty @proutyfx went to set and applied the makeup on actor Dirk Rogers @thehalloweendirk. Reposted from the amazing Howard Berger (@hoops511) ''It’s always a bit disappointing when so much effort goes into something that ends up in the cutting room floor, but I get it and it’s always what is best for the final product" @birdboxmovie @netflixfilm @knb_efx — #makeupeffects #sculpture #birdbox