“Bird Box” may not have started out as bright as “Bright,” but it sure caught up pretty quickly.

The Sandra Bullock thriller on Netflix was watched by nearly 26 million unduplicated people over its first week, Nielsen said on Tuesday. Of the Netflix programming measured by the TV ratings currency company, that’s second only to the first seven days of “Stranger Things 2” — and it was pretty close (within a million viewers) to that one.

On its premiere day, “Bird Box” reached 3.5 million Netflix subscribers. Comparably, Will Smith’s “Bright” was viewed by 5.4 million people. That one’s momentum didn’t hold, however, as “Bright” *only* amassed 20 million viewers by the end of its own first week.

“Bright” was basically the 2017 version of “Bird Box” in terms of release dates.

Also Read: Here's What the 'Bird Box' Monsters Were Supposed to Look Like (Photos)

Here’s a helpful chart of the movie’s day-by-day viewing breakdown: 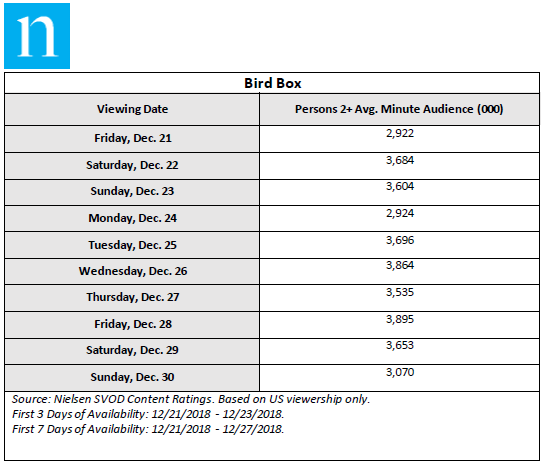 Also Read: Netflix's 'Polar' Trailer Will Give You the Chills - and Possibly Nightmares (Video)

“Bird Box” was a particularly big hit among millennials: The highest concentration of its viewers (36 percent) were between 18 and 34 years old.

Most (57 percent) of its audience was female, and almost half (46 percent) were either African American or Hispanic, which is the highest concentration Nielsen has observed across the Netflix originals it analyzed.

About 22 percent of viewers were Hispanic, 24 percent were African American.