“Birds of Prey” has topped IMDb’s list of the most-anticipated movies of 2020, TheWrap has learned exclusively. The film is one of four on the Top 10 list to be directed by a woman, with the others being “Mulan,” “Black Widow” and “Wonder Woman 1984.”

“Birds of Prey: And the Fantabulous Emancipation of One Harley Quinn,” is directed by Cathy Yan and spins off Margot Robbie’s breakout character Harley Quinn from “Suicide Squad” into her own female superhero team-up. The movie takes place after Harley has split up from the Joker and partners with the superheroes Black Canary, Huntress and Renee Montoya to save a young girl from the evil crime lord Black Mask, as played by Ewan McGregor. Mary Elizabeth Winstead, Jurnee Smollett-Bell and Rosie Perez co-star. It opens Feb. 7, 2020.

“Rather than base its annual rankings on small statistical samplings or reviews from professional critics, IMDb determines its list of most popular movies by the actual page views of the more than 200 million monthly visitors to IMDb,” the website told TheWrap. “This exclusive and definitive data is derived from the IMDbPro movie and TV rankings, which are updated weekly throughout the year.”

The second place ranking for “Sonic the Hedgehog” is a redemption of sorts after the massive backlash sparked by the live action/computer animation film’s first trailer earlier this year. Fans ruthlessly mocked the CGI Sonic’s fur, eyes and human looking teeth, director Jeff Fowler subsequently vowed to fix the character’s design, and the film was rescheduled to Valentine’s Day of 2020. The new design, unveiled in a second trailer released in November, received a much more positive response.

Coming in at No. 3 is “Top Gun: Maverick,” which is Tom Cruise’s return to the saddle of a fighter cockpit for this sequel to his 1986 blockbuster “Top Gun.” Joseph Kosinski, who Cruise worked with on “Oblivion,” is taking over for the late Tony Scott in the directing chair. And in addition to Val Kilmer reprising his role as Iceman, the film now stars Jon Hamm, Jennifer Connelly, Miles Teller, Ed Harris and Glen Powell. It opens June 26, 2020.

Also Read: 'Birds of Prey': Black Mask Revealed While Harley Quinn Breaks Things (and Up With Joker) in New Footage

Rounding out the rest of the Top 10 are the 25th James Bond movie “No Time to Die” starring Daniel Craig in what will be his fifth and final Bond outing, the Marvel prequel film “Black Widow” starring Scarlett Johansson, Disney’s live-action remake of the animated film “Mulan,” the superhero sequel “Wonder Woman 1984” starring Gal Gadot, Denis Villeneuve’s epic, sci-fi remake of “Dune” starring Timothée Chalamet, the action prequel to the “Kingsman” franchise called “The King’s Man,” and finally “Fast & Furious 9.”

See the full rankings below, and check out the list of IMDB’s most-anticipated new TV shows of 2020 here. 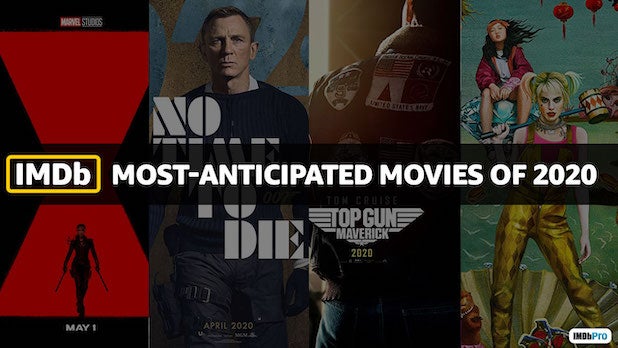 IMDb Most-Anticipated Movies of 2020*
“Birds of Prey: And the Fantabulous Emancipation of One Harley Quinn” – Feb. 7
“Sonic the Hedgehog” – Feb. 14
“Top Gun: Maverick” – June 26
“No Time to Die” – April 10
“Black Widow” – May 1
“Mulan” – Mar. 27
“Wonder Woman 1984” – June 5
“Dune” – Dec. 18
“The King’s Man” – Sept. 18
“Fast & Furious 9” – May 22
*Among the movies with planned releases in the U.S. in 2020, these 10 were consistently most popular with IMDb users as determined by the actual page views of the more than 200 million monthly visitors to IMDb worldwide. This exclusive data is derived from the IMDbPro movie rankings, which are updated weekly throughout the year. IMDb users can add these and other titles to their IMDb Watchlist, and get alerts when they become available. To create your personalized 2020 Watchlist, go to: https://www.imdb.com/watchlist.