Proximity is turning out to be everything in the Anna Nicole Smith hearings: Where Smith’s TV remote was when she reached for it and fell out of bed, dislocating her shoulder; how close her Coach bag of meds was to the reality TV star’s bed during a detox stay at Cedars-Sinai; the next-door location of Studio City homes belonging to Smith and her psychiatrist – and who was in Smith’s bed there or in a guest room. 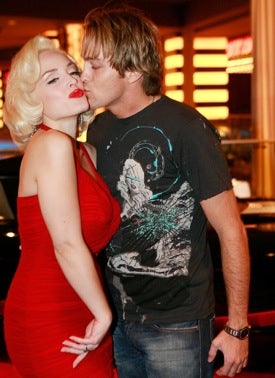 Friday saw the much-anticipated appearance of Smith’s onetime paramour, Larry Birkhead, who claimed he saw her morbid obsession with the paparazzi and tabloid media “bring on a seizure or two.”

The morning session brought the end of bodyguard Maurice “Mo Mo” Brighthaupt’s testimony for the prosecution.

A massive figure somberly dressed in a blue shirt and cobalt slacks, Brighthaupt regaled listeners in his deep, narcotizing voice.

He told how he prevented a distraught Smith from jumping onto the casket of her son, Daniel, as it was lowered into the earth one month after the 20-year-old had died of a methadone overdose; and how Smith’s lawyer-lover, Howard K. Stern, would take pictures of Smith when she was blotto.

Brighthaupt, whose IMDb rating has shot up 77 percent this week, claimed Stern was a controlling influence in her life.

“She relied on him for everything – picking up food, picking up drugs,” the bodyguard recalled, as Stern smiled malevolently from the defense side of the court.

The hearing before Superior Court Judge Robert Perry could become a reliable curtain-raiser to a trial, if Perry decides that what he hears is enough to put Stern and doctors Khristine Eroshevich and Sandeep Kapoor in the dock on charges they conspired to illegally supply Smith with a breathtaking spectrum of sedatives and painkillers.

Again and again, however, an agitated Deputy District Attorney Renee Rose found herself talking to Perry’s hand as the judge cut off her attempts to introduce results of the tox screen that coroner’s officials produced following Smith’s death in February 2007.

“Time out! Time out!” Perry ordered. “Miss Rose, calm down!”

Brighthaupt’s appearance produced some sparks during cross-examination by Stern attorney Steven Sadow. The testimony of Stern’s onetime romantic rival for Smith, Larry Birkhead, however, proved as soporific as the chloral hydrate Smith favored.

Birkhead, 34, a photographer Smith had met at the 2004 Kentucky Derby, wore a dark chalk-stripe suit and sported what could be called an A-frame haircut. He strode uncomfortably to the witness stand while clutching a bottle of water.

For the rest of the day, the Louisville native was asked about his two-year romance with Smith and allegations about her abuse of drugs. Birkhead was no Fighting Kentuckian, however, refusing to engage his interrogators as had Brighthaupt – instead, he politely answered questions in a soft drawl.

When asked by Rose, Birkhead rattled off the contents of Smith’s medicine chest like a seasoned pharmacist:

“Topamax, Klonopin, Lasix, Valium and some sort of potassium pill,” Birkhead inventoried. “Methadone was a regular medication. I didn’t see Dilaudid. Vicodin was used throughout the relationship.”

Birkhead claimed that early on he informed her physician, Dr. Kapoor, that Smith seemed to be taking too many meds and that he, Birkhead, suspected his new girlfriend was being written extra prescriptions under pseudonyms by a second doctor. One can only imagine the suave smile with which Dr. Kapoor must have greeted that news.

Birkhead also admitted to having had an “icy” relationship with Stern, and no wonder – besides their celebrated dispute over who fathered Smith’s daughter, Dannielynn, Stern would sleep over at Smith’s Studio City home while Birkhead was bedding his ex in another room. Time and expediency have ameliorated the tension, however.

“We kind of have a working relationship,” Birkhead said of his present entente with Stern. “He’s the executor of Anna’s estate.”

Still, at various times during Smith’s stays at Cedars, the two men would find themselves sleeping on spare beds in her hospital room, though mercifully not at the same time. Birkhead explained the need for his bedside vigils.

“She’d get up ‘to feed the dogs,’” Birkhead said of one of Smith’s middle-of-the-night awakenings during a detox visit, in which she imagined she was back at home. “The IV cart was still attached to her and I yelled, ‘Anna!’”

Under the methodical cross-examination of Stern attorney Steven Sadow, Birkhead admitted that Smith had legitimate needs for her medications.

“One of her hands would swell four times the size of the other,” he said. “She had restless legs, she suffered seizures and had headaches and migraines.”