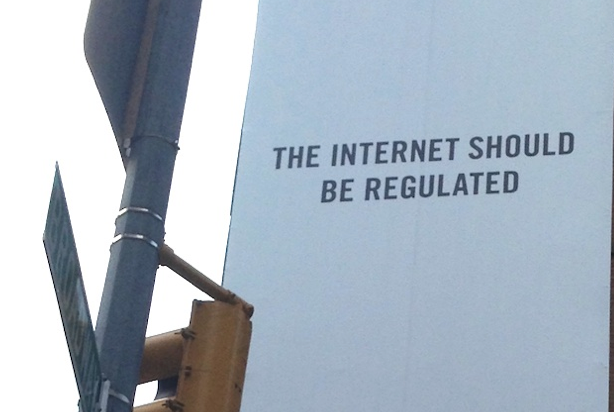 BitTorrent is wading into the debate over government surveillance and data mining.

The company behind technology that allows users to share large files copped to a series of provocative billboards that have been cropping up around New York, Los Angeles and San Francisco.

The signs contain messages like “The Internet Should Be Regulated,” “Artists Need to Play by the Rules” and “Your Data Should Belong to the NSA.”

The provocative statements come as BitTorrent is busy re-branding itself as an artist-friendly platform for the creative community to host videos and share music.

It’s an opportunity for the company to weigh in on the ongoing fallout from former defense contractor Edward Snowden’s revelations that the National Security Agency has been operating secret intelligence programs that involve collecting information on the telephone and internet activities of millions of Americans.

In a message on its blog, BitTorrent said it put up the billboards as a reminder of the ramifications of what’s at stake on the web.

Also read: BitTorrent to Hollywood: We’re Not Pirates – We Come in Peace

“As a society, we’ve chosen to accept data centralization: personal information as property of a powerful few,” the blog post reads. “We’ve chosen to accept walled gardens of creativity: a lifetime of work (our life’s work) locked into digital stores that take 30% of the revenue and streaming services that pay pennies in royalties. We’ve chosen to accept surveillance culture: the right of security agencies to violate the Fourth Amendment; to see and store data as they see fit.”

In response, BitTorrent writes that it will remain committed to preserving the privacy of its users and to keeping the web free, open, decentralized, and accessible to all.

It will also continue to put up creepy billboards before eventually admitting it. That’s what freedom is all about.