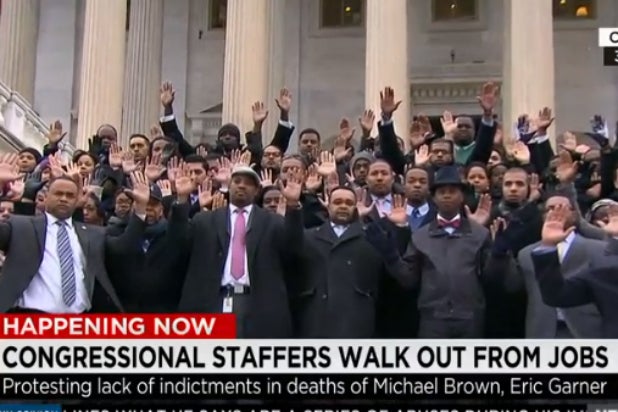 Congressional staffers — the majority of them black — walked off the job on Thursday to support the families of Michael Brown and Eric Garner.

After standing in silent protest over the lack of grand jury indictments in both cases, U.S. Senate Chaplain Barry Black spoke to the press from the steps of the Capitol building. He was flanked by at least several dozen supporters.

“We’re gathered here today so that we can be the voice for the voiceless,” Black began. “We believe that there is a power that has fueled our nation toward excellence through the centuries.”

“And we are here today to take advantage of the free exercise rights guaranteed to us by the framers and founders of this nation,” he continued, before launching into prayer.

Also read: Jon Stewart Ready to Talk Eric Garner, Asks Republicans: 'What the F-ck Are You Talking About?' (Video)

Later, the staffers posed for a powerful photo, all of them silent with their hands up — symbolic of the protests that began following the shooting of the Ferguson, Missouri teen.

Also read: Russell Simmons Squares off With Bill O'Reilly: 'Your War on Drugs' is Destroying Fabric of Black Community (Video)