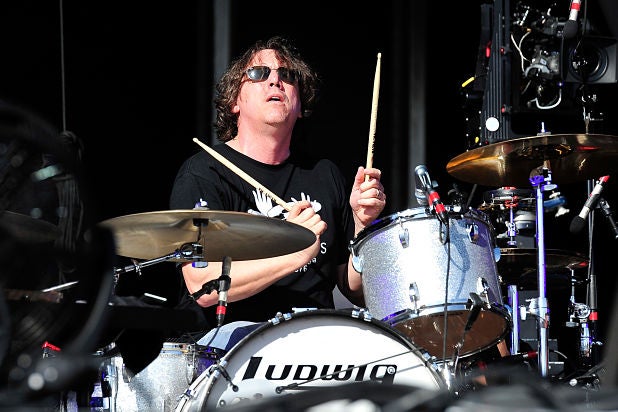 Say this much for former Black Crowes drummer and co-founder Steve Gorman: He knows when to fold ‘em.

His new memoir, “Hard to Handle,” which was co-written with author Steven Hyden, isn’t just a reference to his former band’s breakthrough Otis Redding cover. It also describes the decades of band dysfunction, co-dependency, addiction and brotherhood.

When the Atlanta-based outfit burst onto airwaves and MTV in 1990, their combination of rock, blues and Southern rock stood out from the hair metal, pop-rock and later, grunge. But, as on fire as they were from 1992-1996 with their creative output (which included hits like “She Talks to Angels, “Jealous Again,” “Remedy and “Hard to Handle”), in the book, Gorman describes what went on behind the scenes as far-less of a fairytale. The fact that the Black Crowes were able to survive for nearly 25 years is somewhat of a rock miracle.

“The strength and positivity were never strong enough to win out over the doubt and insecurity,” he said. “I look at the Black Crowes as a separate organism — it was a thing I was a part of. I really believe that the brothers (Chris and Rich Robinson) thought it was them and then Chris thought it was him. And that was the death knell.”

Though the Crowes called it quits in 2014, which is described in detail early in “Hard to Handle,” Gorman had planned to write a memoir on the Crowes as early as 2010, the year he thought the band was on its last tour. But it took until the death of Crowes keyboardist Ed Harsch in 2016 to be the impetus for Gorman to write this book, which may prove to be the definitive work on the Crowes.

“Once Ed died, I went ‘F— it, this band is never going to happen again,’ at least the real band,” he said. “Chris and Rich may play — in fact, I’m quite certain they will play sooner than later as the Black Crowes — but it’s not going to be a band or the band. I’m not going to be there. It’s just going to be a f—ing joke. That’s a brand, I’m going to write a story about a band.”

One of the more interesting anecdotes from “Hard to Handle” is when the Crowes meet, and eventually perform with, guitar God Jimmy Page. In 1999 and 2000, the Crowes played a slew of dates with Page, and Gorman’s portrait of Page from behind the curtain far more humanizing than the carefully-crafted image the guitarist has made for himself, which is mostly shrouded in mystery.

“I never thought the two key figures in my life at a certain point were Jimmy Page and Robert Plant,” Gorman quips of the Led Zeppelin legends. “People don’t think of Jimmy Page as a riot, but he let his guard down around us and I certainly felt honored by that.”

The magic that encompassed the band’s biggest years couldn’t overcome the internal squabbles.

“The two brothers, their problems were always each other,” Gorman said. “‘Tell him to go to therapy, I’m not going’ and the rest of us are just as f—ed in our own ways. We never threw our hands up and got therapy, even though we had a great manager (Pete Angelus) who said we needed it. It’s not traumatizing to have Chris Robinson, the singer of the Black Crowes, disregard your opinion and tell you to f— off. What is traumatizing is to have a guy you believe in and who you thought was your friend do that. When your friends disregard and dismiss you and laugh at your passion that they’re taking credit for, that’s terribly jarring. And it was happening all the time.”

But that doesn’t mean there weren’t good times sprinkled in either.

In fact, oddly enough, the Crowes were at their most functional when they toured with the other notoriously prickly brother band, Oasis. That tour, he says, was when both bands were able to hide their internal warts and would have a blast as a singular group of musicians. Despite the antics of the Robinsons and Oasis’ Gallaghers, the groups would hang out frequently, including on their days off.

Later in 2001, both of the bands, along with Welsh band Stereophonics and Scottish outfit Travis had a legendary hang in Tokyo. At the time, Gorman thought he was through with the Crowes, and told his wife to bring their soon-to-be 1-year-old son for the trip, knowing that this was going to be it.

“I had already decided I was out,” Gorman recalled. “All four bands ended up at this bar in Tokyo called Abbey Road and there was this Beatles tribute band playing, and they’re incredible. All of the bands are drinking pitchers of Heineken and singing Beatles songs for hours while this band is playing them on stage. Whatever dysfunction every one of those groups had, you find yourself in Japan singing Beatles songs — life doesn’t get much better than that.”

However, following two drummer replacements, Gorman rejoined the Crowes in 2004. The group choogled along with their usual fits until early 2014, where after a corporate gig for — of all places — the Boys & Girls Club in Boston, they painstakingly called it quits.

At the time, Gorman said that the Crowes were planning to hang on for a wide-ranging 2015 tour that would celebrate the band’s 25th anniversary, and call it quits once and for all with a massive tour. But, it didn’t turn out that way.

“I really loved the notion of doing that tour and standing up on stage at the end of the last night and all shaking hands and saying ‘Godspeed, we did it and let’s put this to bed with dignity for once,'” he said. “But Chris couldn’t do it, he blew it up because it makes perfect sense and would have been a great way to end the Black Crowes. But he couldn’t allow it to happen and he doesn’t have the ability to let things go in a practical, actual, giving way. That’s not who he is”

As for Gorman himself, he’s back doing rock, this time as a radio host. His “Steve Gorman Rocks!” radio program is an extravaganza for rock fans, going from 7 p.m. to midnight, syndicated on 20 stations on Westwood One/Cumulus. But, he has no anger or regrets over how things turned out with the Black Crowes, just a feeling of sadness.

“I’m not angry, I’m sad,” he reiterated. “I’ve been angry and I’ve been furious and foaming at the mouth in the past. But that’s not me now. I see it all (the band’s history) for where it fits. It’s alright for where it’s gone, for better or worse. There was a finality to the dream of what that band was (when Harsch died). What I’ll die and be sad for the rest of my life, to the extent that I think about it or care, is that we had a few years there in the ’90s where we were so special and so unique. The whole was greater than the sum of the parts, and we became one of those bands we wanted to be. When that got destroyed, that’s the part that’s sad.”