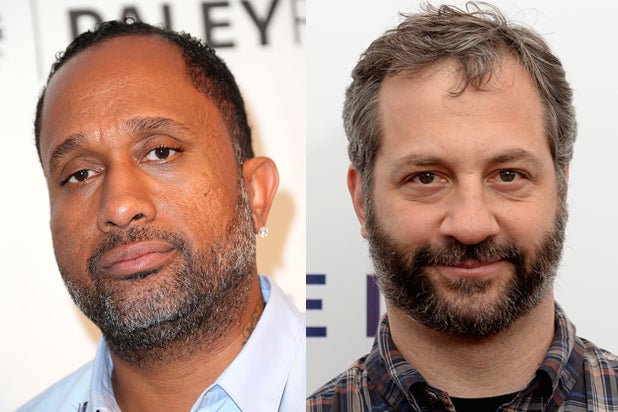 Judd Apatow has repeatedly criticized Bill Cosby and his supporters in a barrage of recent social media messages, but now “Black-ish” showrunner Kenya Barris is calling the “40-Year-Old Virgin” director out.

“Dude. Enough,” Barris tweeted on Monday night. “Not defending [Cosby] at all, but u do realize this borders on strangely obsessive, right? Where was ur #EricGarner[?]”

“I mean ur a comedy god but u have an extremely narrowband and privileged scope for ur powerful rage,” he continued. “He’s probably a monster.”

As TheWrap previously reported, dozens of women have accused Cosby of rape, drugging and sexual assault over a span of several decades, with many of them just coming forward in recent months. The comedian hasn’t been charged with any crimes stemming from these allegations, but there has been fallout, including the cancellation of a Netflix special, the suspension of re-runs of “The Cosby Show” on TVLand and a string of live performances canceled or postponed.

But not every upcoming Cosby appearance has been axed. Apatow took issue with two Canadian venues that are still scheduled to host the comedian in early January. The “Trainwreck” director-producer also called out those he felt may have been defending Cosby on Twitter.

“I guess it’s because guys who rape a lot aren’t cool,” Apatow wrote on Friday to one user who also labeled the director’s Cosby campaign an “obsession.”

Apatow slammed Cosby again over the weekend. “I always wonder why some people try so hard to not believe women who have been assaulted,” Apatow tweeted. “What is the root of that?”

Barris, who created and runs ABC’s “Black-ish” and also wrote nearly 20 episodes of BET’s “The Game,” wants Apatow to know his point has been heard loud and clear. But Barris also expressed remorse over calling out the comedy director on Twitter.

“I’m sorry to use a public forum to say this to one of my idols but I think it’s important to take a moment to say ‘we get it, Judd.'” Barris later wrote.

Read more of Barris’ tweets below.

@LoribelleAretz @JuddApatow – of course his victims deserve a voice & I'm glad someone prominent is doing it. But there should be balance.

@GREGORYABUTLER – ur insane. Nobody rational would "apologize" for a rapist (monster). And who's that screaming on your cover page? Creepy.

@mrsrsterling @JuddApatow – that is true! Thank you! My point exactly! Now what do you have to say to that Judd??