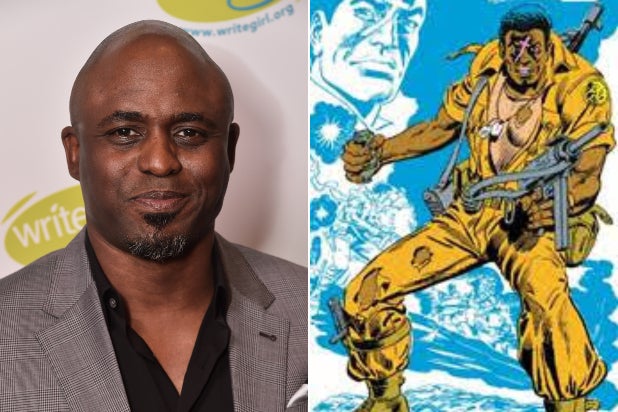 “Black Lightning” is adding Wayne Brady in a very non-Wayne Brady type role (unless you’re a fan of “Chappelle Show” that is). The “Whose Line is It Anyway” star and “Let’s Make a Deal” host is coming aboard the CW series as the DC Comics villain “Gravedigger.”

The character, who will make his first appearance in an episode that will air in early 2020, goes by the real name of Tyson “Gravedigger” Sykes.

He’s a World War II-era veteran of the U.S. military who becomes an enhanced “Super Soldier,” after an experiment gifted him with enhanced strength, agility, tactical genius, and hand-to-hand combat expertise. After the war, Sykes defects to the fictional country of Markovia, where he seeks to create a metahuman paradise. This of course, will pit him against Jefferson Pierce/Black Lightning (Cress Williams).

“Black Lightning” returned for its third season this week (see how the DC Comics drama did here), and it gearing up to cross over to the rest of the “Arrowverse” for the first time in the upcoming “Crisis on Infinite Earths” event that begins in December.

Produced by Berlanti Productions and Akil Productions in association with Warner Bros. Television, “Black Lightning” airs Mondays at 9/8c on The CW.

24 of the Most Memorable Female Superheroes, From Batwoman to Okoye to She-Ra and More (Photos)

With "Batwoman" finally airing on The CW, we've compiled a list of other memorable and bad-ass superheroines. From "Wonder Woman" to "Captain Marvel," here are some super-women you don't want to mess with.