An Atlanta news producer has lost his job after a series of insensitive Facebook posts calling for harm against Black Lives Matter protestors, which he described as “human turds.”

Atlanta Journal-Constitution reported that the hateful comments are the reason the now-former CBS46 WGCL photographer and producer Charles Beau Menefee was dismissed.

“BLM is blocking the street… But I have a solution! How about we box everyone in and drop a f—ing bomb on it?” one post said. Another Menefee Facebook post said, “I think it would be cool if someone rained gunfire down on to the ignorant human turds at the next #blacklivesmatter march.”

Also Read: What is Black Lives Matter? A Short Explainer

“Wow, look at all the great things #blacklives matter is making happen in the world,” he wrote in another post. “An ARMED ignorant piece of sh-t with a gold grill in his mouth like Alton Sterling was totally a reason for you unevolved [sic], uncivilized turns to kill good, moral, civilized people like police officers. Go die.”

Menefee wished death upon members of BLM at least twice. The Facebook posts were first reported by FTVLive.

Menefee was nominated for a 2015 Emmy for Ferguson coverage and won an Emmy back in 2012 while working at CBS affiliate WTVR-TV in Richmond, Virginia, according to the AJC.

See screenshots of his comments below. 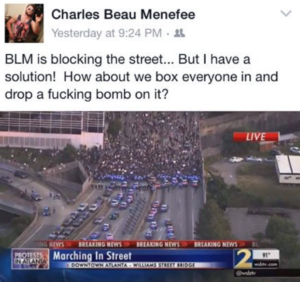 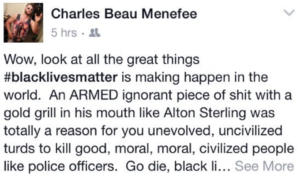