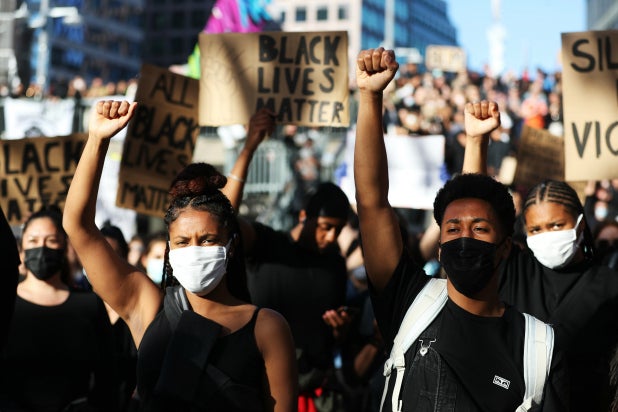 There is so much I want to say; so much I feel I need to say. My thoughts and arguments and pleas come to me in bits and pieces, fits and starts. I’ve been trying desperately to scoop them up — save them for later when I can assemble them into a coherent work — before the wave of emotions comes again and carries them away.

I hurt. I’ve cried in attempts to express my feelings, I’ve cried thinking about the overwhelming misery of it all — hell, I couldn’t even search the Getty archives for an image to top this article without tears coming to my eyes, seeing pictures of my brethren taking to the streets around the world to fight and desperately demand change.

I have cried every day since watching for eight minutes and 46 seconds as that white police officer knelt on the neck of George Floyd, killing him.

I’ve seen too many of these videos. They play in the back of my mind over and over, like a warning, and not just this week, or last, but for as long as I can remember.

I’m weary, physically ill from the weight of 400 years of oppression. No, it actually has been 401 years since “some 20 and odd Negroes” were stolen away from their homeland and in 1619 dragged to the shore of what would later become Virginia.

It’s been 401 years since the seed of “the black condition” was buried in this country’s soil, 65 years since Emmett Till, and still black men and women are all but lynched in broad daylight.

I didn’t learn about Emmett Till in school. My white friends and classmates didn’t learn about Emmett Till in school. He was 14 when he was lynched, mutilated, body dumped in muddy Mississippi waters in 1955 for the crime of whistling at a white woman. My parents taught me at an early age, earlier than 14, about his unjust murder. They taught me never to do anything to set off white people in positions of authority, taught me to be better, well spoken, well mannered, well dressed. They taught me more than anyone should have to teach a child just so he or she can make it to 29 years old, and even then I’ve had more than my fair share of “run-ins” with white police officers.

I’ve been called a nigger. I’ve had people threaten to call the cops just because I pulled over and asked for directions in the “wrong” neighborhood with my pops. I’ve been told I couldn’t walk with my friends in the mall because too many of us (four) in a group seemed like a gang. But there’s one instance in particular that I often revisit and think how different things could have been.

Before moving to Los Angeles, with its plethora of trails, hikes, deserts, and beaches, I lived in New York City — Brooklyn, to be more accurate, and Crown Heights to be exact. New York, for all its grandeur, has a way of running you down every now and then.

I was dating a girl at the time — white, Yale graduate, from damn near as far upstate as one can go while still calling it civilization — and we’d had about enough of New York. It was time for a getaway, and we both loved a road trip.

My aunt and uncle own a cabin up in the Great Smoky Mountains in Tennessee, near Gatlinburg — beautiful views, jacuzzi, good whiskey — it was perfect. It’s about a 12-hour drive; no big deal.

We rented a car and left the city behind. I took the first shift, because driving out of the city can be stressful and I’m typically the calm one. Our route took us into New Jersey, through Pennsylvania, Maryland, Virginia, and on into Tennessee.

We were gliding in the rented Chevy Equinox somewhere in Pennsylvania, probably bumping some John Denver — “Country Roads” (it’s a great song, and what else would you listen to on a road trip to the Smoky Mountains?). We had a 12-hour trip ahead of us, so I’m sure I was pushing the speed limit — maybe 5 or 6 mph over — nothing crazy, nothing anyone wouldn’t do. And I’m sure I’m wasn’t even the fastest car on the highway. Then, from my side view mirror, emerging from behind a semi, I saw the state patrol car.

Something you should know about being black, and about how I was raised, I’m always on edge when I see a cop. I talk in my calmest voice, I slow down even when I’m not pushing the speed limit. I do what I can to look as not suspicious as I can.

I made my way across a few lanes of traffic to the shoulder as my girlfriend in the passenger seat realized what’s happening.

“Don’t worry, be calm,” I’m sure I said to her as the trooper pulled up behind us. She pulled out her phone, discretely, and started recording — Yale graduate, and a journalist.

I made sure to have the window already rolled down, my license out when he walked up. I couldn’t tell you his name, couldn’t tell you what he looked like. All I know is he was white, with a badge and sunglasses he didn’t take off.

“You know why I pulled you over, you slowed down as soon as you saw me.”

“Can I get your license and registration?” And as I reached across my girlfriend to get it from the glove box — he wanted me to get it, not her — he asked where we’re coming from.

“Brooklyn, to be specific,” I chimed in. “We’re headed to my family’s cabin in the Smoky Mountains.”

“That’s Tennessee?” And I nodded, “Yeah,” as I handed over my license and the rental car’s registration. He walked it back to his car, to check some stuff, I assume, and then I looked over to my girlfriend. Boy, did she look uneasy, a look I’ve never gotten out of my head. To me, this so far has been a success. But this is 2017, we’re just a year removed from Terence Crutcher, Philando Castile and Alton Sterling. While I had been listening to these warnings for as long as I can remember, the national coverage and public outcry made it new to a lot of people and it still hung, raw, in the national consciousness.

I didn’t realize how long it was taking the cop, until she said something about it, and then he was back at my window. He asked for her ID now and when she gave it to him…

I’m not looking at her, but I can only imagine the look of terror on her face now.

My face was still, my voice was calm, and my heart was trying to beat through my chest. The way I see it, I’m not escalating. I’m not outright disobeying. But I knew there’s no way I’m going to let this man potentially lead me into a situation in which I become another name, another hashtag.

I wasn’t scared really, and I told him such. My heart wasn’t pounding out of fear, it was because of the unknown of what might happen and the knowledge of what could. I didn’t consider it in the moment, but maybe he was scared. Maybe his heart was also pounding, not knowing what might happen.

But I got out of the car. He walked me to the rear and into what my girlfriend would later tell me was a blind spot in which she struggled to keep an eye on me.

“Have you been drinking?”

“Is there any alcohol in the car? What about the girl?”

Please don’t bring my girlfriend into this, I thought. Not my white girlfriend: “Uh, no.”

I’m so baffled at this point, I’m sure my face scrunched up at this question. Of course we drank last night — a bottle of wine — we’re two mid-20s professionals, both journalists, living in New York City… me in Brooklyn.

“OK, well I smelled alcohol in the car, that’s why I needed you to get out. You understand? I’m gonna let you off with a warning.”

He handed me our driver’s licenses: “Here, give this back to your — the girl.”

I noted this — I’m on edge and acutely aware of everything. I didn’t read too much into it, but I understood it, and so did she when I told her later, after she’s done asking me for the hundredth time if I’m “OK.” We went back to “Country Roads” on our way to more wine and a jacuzzi. But damn if I haven’t been able to stop thinking about ways in which that could have gone wrong, ways I might have done something to set off that white man in a position of authority and wind up no longer breathing.

Three years later and there are images of police inciting violence and unrest — sometimes by their mere presence — at otherwise peaceful protests precipitated by the killing of George Floyd. For many of the black and brown protesters this is nothing new, nothing they didn’t know could happen. It’s a likelihood.

There’s been rioting and looting across the country, and while I certainly don’t condone it, I understand it. Many of us have always known that our country doesn’t care about us. We’ve had 401 years of learning that, remember? And when you’ve finally had enough, when you recognize your country values capitalism more than human life, the only thing left — the only way to get your country to care — is to target the symbols of what your country holds dear.

Martin Luther King Jr. never called for peaceful protests. A protest by its very nature is meant to disrupt the status quo, disrupt your comfort, the “peace.” Dr. King was adamant about nonviolent protests, but the man didn’t lead thousands of demonstrators 54 miles from Selma to Montgomery, Alabama, to keep the “peace.”

I’m aware that for many of my white friends and colleagues I am likely the only black person they truly know, the only black perspective they see, the only voice they hear. And I’m always calm, always reserved, even when time and again a black man, or woman is slain for all the world to see. Trey is always OK. Trey is never angry, never emotional. I can only imagine when my white friends and colleagues see that, see that reaction, the thought is, “OK. Maybe it’s not that bad?”

Well, no more. I’m not OK, and you shouldn’t be either.

My heart is broken. So, honestly, why should I give a damn about your windows?

Trey Williams has been a film and business reporter for TheWrap since 2018.

Rev. Al Sharpton delivered the eulogy for Floyd, who was killed in police custody on Memorial Day

A memorial service was held for George Floyd in Minneapolis Thursday, ten days after a police officer killed him by using his knee to choke him for more than 8 minutes, while other officers standing by mocked his pleas for help.

All four former Minneapolis police officers involved in the fatal arrest have been charged. Derek Chauvin, who knelt on Floyd's neck for nearly nine minutes, faces second-degree murder charges. The three other officers are charged with aiding and abetting second-degree murder.

Thursday's memorial at North Central University is the first of several; services will also be held in North Carolina and Texas.