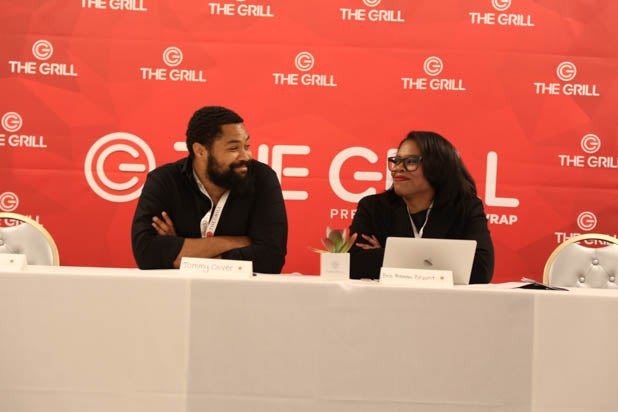 Even at a roundtable discussion full of people eager to talk about the importance of diversity and inclusion, there is always room for change.

At the 9th annual TheGrill conference held Wednesday at the London West Hollywood, one participant pointed out that the room was divided — people of color were sitting on one side, while white people sat on the other.

“It was ironic as s—,” said panelist Tommy Oliver, producer of OWN’s “Black Love” series and the 2015 film “The Perfect Guy.” He was joined in leading the discussion by Brie Miranda Bryant, senior vice president of unscripted development and programming at Lifetime and co-producer of Lifetime’s game-changing documentary “Surviving R. Kelly.”

“To me it’s like, you can talk about those things or you can get the hell up,” Oliver said of his decision to prompt guests to switch seats. “We can see something that’s problematic and say, ‘Oh, how did this happen? This is so bad.’ Or, get the f— up.”

And that’s exactly what they did.

At Oliver’s instance, both sides of the room got up, shuffled around, and found someone new to sit next to — someone they’d never met before.

“If you know the person next to you, then it’s a problem. Move. It was just a sense of taking action at that point, and not just making yourself feel better because you can analyze the problem,” Oliver said.

The situation echoed a sentiment that was raised several times over the course of the discussion — implementing diverse hiring practices is hard when your pool of connections is small and limited.

“When you’re around people, you get to know people. You realize that, guess what? They’re just like you. If you’re in your comfort zone, then you’re blocking your blessings, as they say. You’re blocking the potential to meet somebody that you could get along with,” Oliver said.

In 2015, Lifetime launched the “Broad Focus” Initiative, which Bryant said solidifies the network’s commitment to provide more opportunities for women in the entertainment industry.

“We commit ourselves to hiring female writers, producers, directors, etc, and the inclusion rider right now, which was introduced by Regina King and Frances McDormand, started a mainstream discussion,” she said. An inclusion rider is a stipulation that actors and actresses can request to be put into their contracts that requires a certain level of diversity among the cast and crew of that project.

Devin Johnson, president of the athlete empowerment brand UNINTERRUPTED founded by LeBron James and Maverick Carter, also joined the roundtable. Johnson said that no new hires are made at the company unless managers have considered a “diverse slate of candidates for every position.”

Bryant also emphasized the importance of diversity and how it doesn’t fit into just one definition.

“I don’t think it’s as simple as being black or white,” she said. “It’s the key to true innovation, which is topical… when you talk about emulsion of two very stable ideas and putting them together when they normally would never mix, that’s when you can come up with a different way into standardized tropes. So the more voices that are at the table able to create those different perspectives, the stronger your creative is going to be.”