It’s another role in which Depp can disappear into the prosthetics, yes, but this time he’s not letting the contact lenses and the fake teeth do all the work. (Oddly enough, given the actor’s ongoing fascination with Hunter S. Thompson, he does resemble the Thompson-influenced Uncle Duke character from “Doonesbury.”)

There are shades of 1970’s Jack Nicholson and Robert DeNiro in the performance, but ultimately, this is Depp bringing his skills to the table as a man with a propensity for being both terrifying and charming, often switching between the two on a dime.

There’s more to the film than just Depp’s standout work, however: director Scott Cooper (“Crazy Heart”) — working from a script by Jess Butterworth (“Edge of Tomorrow”) and Mark Mallouk, based on the book by Dick Lehr and Gerard O’Neill — tells the larger story of how Bulger and FBI agent John Connolly (Joel Edgerton) struck a devil’s bargain, in which the bureau ignored Bulger’s crimes in return for his help in bringing down his Italian rivals in the Boston underworld.

It’s the kind of story loaded with twists you wouldn’t believe if they weren’t true: in “Angels with Dirty Faces” fashion, Connolly and Bulger grew up together on the mean Southie streets, and their sense of loyalty to each other came to overwhelm their respective duties as Fed and criminal. (Lots of Bulger’s associates wind up talking to the FBI in this movie, but they preface everything with “I’m no rat.”) Meanwhile, Bulger’s brother Billy (Benedict Cumberbatch) was a state senator wielding power in Massachusetts politics while Jimmy was running drugs and prostitutes. 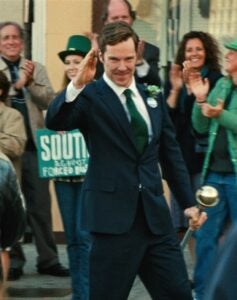 Cinematographer Masanobu Takayanagi (whose exemplary work is also on display in “Spotlight,” another Venice Film Festival premiere) achieves a stripped-down look that doesn’t try too hard to consciously ape the contemporary mob classics of Coppola or Scorsese. In Cooper’s last crime saga, “Out of the Furnace,” the photography overwhelmed everything else in the movie, but here it accentuates the storytelling without calling attention to itself. (The same can’t be said for the Junkie XL score, which tends to excessively underline whatever’s happening on screen.)

Just about every speaking role here has an acclaimed actor attached to it, and they’re given varying amounts of time and material to make an impression. For every standout like Julianne Nicholson (as Connolly’s wife), Corey Stoll (as a no-nonsense US attorney) or Rory Cochrane (enacting vengeance upon Bulger’s enemies), there’s Adam Scott, who gets to do little but sport a really great 1970s mustache, and Juno Temple, stuck playing her umpteenth streetwalker.

While “Black Mass” is frequently engrossing, it has occasional pacing issues; some characters (like Dakota Johnson, playing the mother of Bulger’s child) disappear sooner than you’d imagine, while the film’s last act could stand to lose 15 or 20 minutes. (If the movie starts with hoods turning state’s evidence, thus guaranteeing the plot’s outcome, we shouldn’t notice how long it’s taking to get to the finish line.)

Ultimately, this is Depp’s show all the way, featuring his best dramatic performance since another organized-crime movie, 1997’s “Donnie Brasco.” If this is the milieu we need to keep him this focused as a thespian, then get out those pinky rings, Hollywood, and make Depp more offers he can’t refuse.