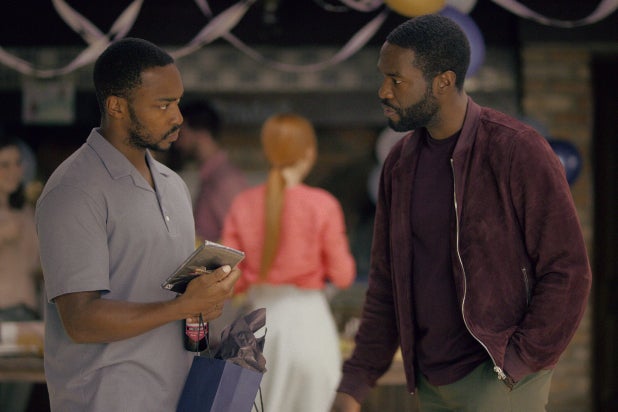 Marvel and DC Comics fans finally got their long-awaited crossover on the screen, just probably not in the way they would’ve expected.

The cast for “Striking Vipers,” one of the three episodes of the fifth season of Netflix’s “Black Mirror,” includes Yahya Abdul-Mateen II, Anthony Mackie, Ludi Lin and Pom Klementieff. And if those names all sound familiar, it’s because they’ve all appeared in either a DC Comics-based or Marvel Studios film.

So we asked “Black Mirror” creator and co-showrunner Charlie Brooker if that was on purpose — hey, this is “Black Mirror” after all — or if the whole thing was just a happy coincidence. “That was an accident of casting,” Brooker told TheWrap. “We were just casting the best people for the job. It was afterwords we thought, ‘Oh this is quite a universes colliding.’ That was just a happy accident.”

Also Read: Here Are All the Ways 'Black Mirror' Season 5 Connects to the Rest of the Show's Universe

In the episode, two friends get very close to one another when Carl (Abdul-Mateen) and Danny (Mackie) face off in an updated version of a game they used to play when they were younger (the titular “Striking Vipers”). But in the new version, they physically inhabit the bodies of the characters they’re fighting within a way-too-real virtual reality setting, with Klementieff and Lin as their in-game avatars. Since you’re reading this story, you know what happens next: video game sex.

TheWrap has much more on “Black Mirror,” including what Abdul-Mateen thought of “Striking Vipers,” how it was almost a VR “Grease” musical, and why the fifth season is only three episodes. Also, Topher Grace talks about his role in “Smithereens.”