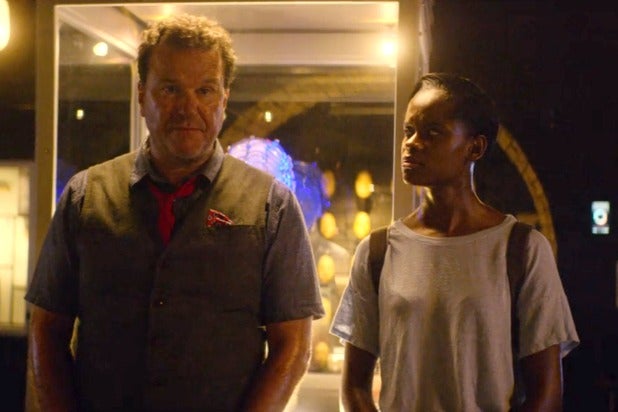 “Black Mirror” continues to intrigue viewers with its often horrific and tragic views of the future. But the show also gets diehard fans’ attention with a huge number of Easter eggs hidden in among its episodes, ones that seemingly suggest all these scary sci-fi stories are taking place in the same beleaguered, dystopian near-future.

The biggest suggestion that at least a big chunk of the anthology stories presented in “Black Mirror” are actually all from the same world is the last episode of Season 4, dubbed “Black Museum.” The episode takes place in a “museum of crime,” and is full of objects seen in other “Black Mirror” episodes. Most of the devices that pop up in the background of the Black Museum are pivotal to Season 4 episodes, but there are plenty of references to earlier ones as well.

“Black Museum” isn’t the first time “Black Mirror” episodes have referenced one another. There are tons of tiny Easter eggs scattered throughout the show that recall other stories in the series. In fact, “Black Mirror” is so referential, some fans have worked to create a timeline of when they occur in relationship to one another.

And in “Black Museum,” there’s the subtle suggestion that not only are all or most of the episodes linked, but that they’re all set in our world. One of the main characters of that episode, Rollo Haynes, makes a few comments that suggest everything in the series is taking place after the 2016 election of Donald Trump in the U.S.

So are all those “Black Mirror” episodes really related? Is most of the show taking place in the same horrific techno-dystopia full of brain implants that can erase people and computer simulations that can torture you for eternity?

There are quite a few references and Easter eggs that tie episodes together. Especially when characters watch TV or see the news, episodes tend to reference story elements from other episodes. For instance, in “White Christmas,” a shot of a TV playing the news includes the snippet “Callow announces divorce” in its chyron. Callow is the prime minister and protagonist from the Season 1 episode “The National Anthem.” The Season 3 episode “Shut Up and Dance” also references Callow, as well as the trial of Victoria Skillane, the protagonist of the Season 2 episode “White Bear.”

There are tons of callbacks like that. Clips of the reality shows seen in the Season 1 episode “15 Million Merits,” which apparently takes place in a dystopian future where everyone lives underground, show up in the background of shots in Season 2’s “The Waldo Moment,” which is set in a time that is technologically pretty much identical to our own. There’s a magazine article in the Season 3 episode “Playtest” about the company Granular, which is behind the robotic bug drones in the Season 3 episode “Hated in the Nation.” In Season 4, we found even more references, both to new episodes and to everything that’s come before.

“Black Museum,” the last episode of Season 4, goes even further with its callbacks. It takes place in a tourist trap sort of location riddled with exhibits related to true crime, but each is actually a device that has appeared in a “Black Mirror” episode.

“I think every episode, I think this is right to say, every episode is either referenced or featured in the museum,” “Black Mirror” Executive Producer Annabel Jones told TheWrap. “In ‘Black Museum,’ we absolutely indulged ourselves, and the whole museum has so much detail in it.”

The museum also is one of the most definitive episodes as far as a timeline of all the episodes could be related. Since all the objects are in the museum already, it means that “Black Museum” has to be set after all the other episodes — or at least the ones that aren’t about apocalyptic situations like “Metalhead” in Season 4 or, seemingly, “15 Million Merits” in Season 1.

But while there are other episodes that reference others, trying to make sense of how “Black Mirror” might actually work as a single universe is where this whole endeavor starts to fall apart. Constructing a timeline in which the show’s events would work in a single world is tough, with some events and references potentially contradicting each other.

Also Read: 'Hang the DJ' Is 'Black Mirror' at Its Most Beautifully Cynical (Commentary)

“In the films, hardly ever do we specify a date that the film exists in or is set in, just because I think it could be quite distracting, because then people are focusing on that and the date — you start deconstructing the world slightly,” Jones said. “Focusing on, ‘well. would that exist?’ And it just becomes a distraction and something I don’t really think that you need. It doesn’t allow you to give yourself to the film. So we very rarely give a date.

“But I think the assumption in ‘Black Museum’ was that this was a few years down the line because the kooky technology that we used in San Junipero, we say was invented a few years ago. And so we change the time frame in ‘Black Museum.’ The suggestion is these things have happened in the past and this is the Black Museum, set slightly in the future. And you wouldn’t know that, of course, because the car that she’s driving is vintage and it’s a fading tourist attraction. So there were little hints of that. But unless it really needs to be specific, we aren’t. We don’t like to be.”

Also Read: 'Black Mirror': You May Have Missed These Two Big Celebrity Cameos in 'USS Callister'

Series creator Charlie Brooker has also suggested that the Easter eggs and references shouldn’t be taken too literally. The episodes are all thematically related, Brooker has said, and the Easter eggs play to that feeling, rather than to a literal continuity.

“I’ve read a couple things where people have tried to work out whether this whole thing is set in one coherent universe, and my view is, if they want to believe that, that’s fine,” Brooker told Thrillist back in 2016 when Season 3 was released. “But I don’t approach it that way, any more than The Twilight Zone was set in one coherent universe. It’s probably all in the same psychological universe.”

So while there are links between the “Black Mirror” episodes, trying to read them together as being a single story seems like a losing battle. That hasn’t stopped fans from trying, though, and “Black Mirror” has even started to tease fans hunting for Easter eggs and crossover clues. Two big Easter eggs in Season 4 are more about clowning fans than about revealing some secret bit of storytelling.

Also Read: Here's Why You Hear That One Song Over and Over in 'Black Mirror'

In “Crocodile,” the third episode of Season 4, one Reddit user stopped to see what was written in a newspaper article briefly referenced by one of the characters. Turns out, the message wasn’t a secret for fans to discover, but a message aimed at them from the show’s creators. It reads, “‘Of course the real question is why anyone would pause what they’re watching just to read a sentence in a printed out newspaper article’, says a voice in your head — before advising you to go and share this finding on Reddit.” And of course, Redditor AFellowOfLimitedJest followed the instructions.

Another fun message pops up in Episode 5 of Season 4, “Metalhead.” Early in the episode, the killer robotic “dog” that chases the characters through the story hacks into a car, with lines of code appearing on a computer screen in the vehicle. Reddit user BRB_UKN checked what those lines say. The first seven lines of code are references to past “Black Mirror” episodes, such as “\BMS1E1.drivers.tna.pigpoke” — “BMS1E1” is “‘Black Mirror’ Season 1 Episode 1,” “tna” is “The National Anthem,” the name of the episode, and “pigpoke” refers to what happens in that episode, in which the prime minister is extorted to have sex with a pig on television.

Past those reference lines come the joke. It’s a line of code that reads, “WHY.did.you.bother.PAUSING.this.you.freak.”

Also Read: 'Black Mirror' Season 4 Reality Check: How Close to All That Futuristic Tech Are We?

So it seems that fans might not want to take “Black Mirror” too seriously. The series links are fun asides to eagle-eyed fans and sometimes even thematic bridges between the ideas of episodes — but it seems the filmmakers aren’t going crazy coming up with a way to create a continuous universe of “Black Mirror.”