From his direct stare into the camera, to his stance, to even the shape of the throne-like chair on which he sits, Chadwick Boseman seems to be evoking a historical figure in the new poster for Marvel’s “Black Panther”: Huey P. Newton.

Newton founded the Black Panther Party in the late 1960s in Oakland, California. And his portrait (below, left) endures as an indelible symbol for the movement, which stood for civil rights and black power.

TheWrap did not immediately hear back from Marvel over whether the upcoming movie’s poster is a direct reference to the famed 1960s portrait — but the similarities are too close to ignore: 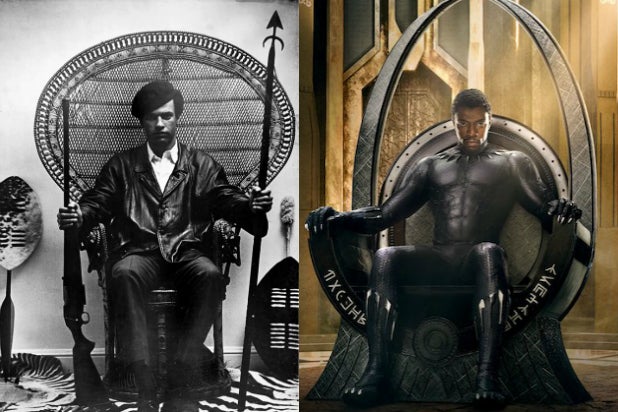 A bit of comic book history: Marvel’s comic character name predates the Black Panther Party by several months — though many people mistakenly assume it’s the other way around.

Stan Lee and Jack Kirby co-created the character, who was briefly renamed Black Leopard to avoid confusion with the activist group, but flipped back to Black Panther after fans and creators alike decided they disliked the new moniker.

Disney-owned Marvel debuted the teaser poster for its upcoming superhero on Friday ahead of the release of the movie’s first raielr. Coogler, who directed “Fruitvale Station” and “Creed,” is making his debut on a comic-book franchise.

In the comics, Black Panther is particularly notable for being the historic first black superhero in mainstream comic books, and the first to have super powers.

Boseman, who debuted the character in “Captain America: Civil War,” appears in the poster sitting regally on a throne in Wakanda, the secretive, advanced African nation that he calls home.

The film follows Black Panther, whose off-duty name is T’Challa, as he returns to Wakanda after the death of his father, the King of Wakanda, to succeed the throne and take his place as king.

When a powerful old enemy reappears, our hero is tested and drawn into a conflict that puts the entire world at risk.

Ross A. Lincoln contributed to this report.