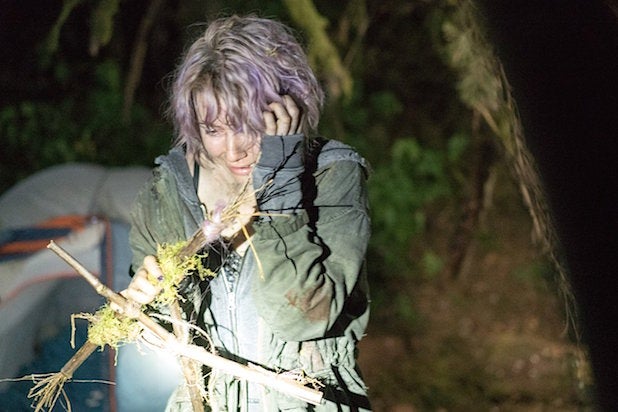 Lionsgate’s sequel to the 1999 found-footage classic “The Blair Witch Project” is poised to win the weekend as it opens in more than 3,000 theaters.

“Blair Witch,” produced for a very modest budget of roughly $5 million, is expected to top the box office with trackers placing its debut at a whopping $23 million (though Lionsgate is hedging bets, saying mid-to-high teens).

Even on the low end of predictions, the movie — about a group of friends who return to a haunted forest in search of a young man’s sister — looks like it will have an easy time topping returning title “Sully” for No. 1.

The big question will be over whether romantic comedy sequel “Bridget Jones’s Baby” will have the stuff to surpass “Sully” for No. 2.

Opening in roughly 2,920 theaters and produced for $35 million, the third installment in the series, following 2001’s “Bridget Jones’s Diary” and 2004’s “Edge of Reason,” also marks the return of Colin Firth, with Patrick Dempsey and Emma Thompson as added newcomers.

Directed by Sharon Maguire, who also helmed “Bridget Jones’s Diary,” the new movie reveals that Bridget is unexpectedly pregnant. So far, it has a strong 88 percent Rotten Tomatoes score.

Meanwhile, Open Road’s historical drama “Snowden” will be lucky if it breaks into double digits. Directed by Oliver Stone and starring Joseph Gordon-Levitt as N.S.A. whistleblower Edward Snowden, the movie is opening on 2,400 screens and was made for $40 million.

“Snowden” starts playing in 800 theaters on Wednesday as part of a sold-out Fathom event, accompanied by a live broadcast Q&A with Stone and Gordon-Levitt from New York, and Snowden himself, who is set join the conversation via satellite from Moscow.