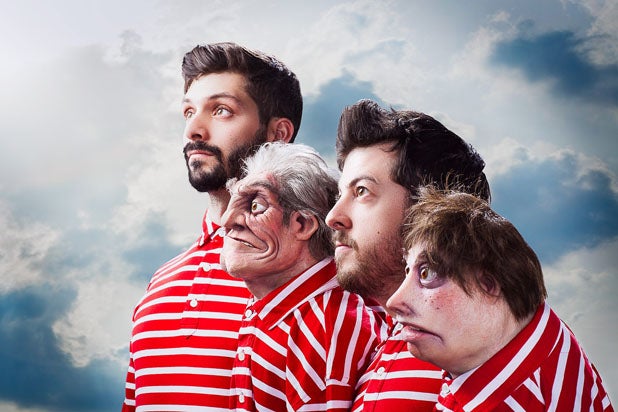 To many younger viewers, the 30-minute sitcom with commercials seems as outdated as having to actually be at home at a certain time to watch something. That generation is speaking by putting their eyeballs elsewhere, with many opting for YouTube videos and Netflix originals over old school cable subscriptions. So why not try a 30-second version?

“We saw that there could be a show that’s engineered for the guy waiting in line at Chipotle,” Adam Aseraf, the show’s executive producer, told TheWrap. “The person trying to get away from Thanksgiving dinner.”

Also Read: The Most Followed Person on Instagram Pulls Away From Competition

Creator Ben Bayouth voices Blark, a crusty but devoted single dad who he describes as “the type of guy who has his gun under the table,” while Chris Mintz-Plasse (best known as McLovin from “Superbad”) plays the yet-nameless son, a “Reddit, video gamer, stay in my comfortable chair type.”

Bayouth said the show taps into “that universal quality of what it’s like being a 12-year-old,” around the age when one starts locking the door to prevent Dad from barging in. The odd-couple father and son dynamic is an established sitcom premise, but hasn’t necessarily been done on social video platforms like Instagram, which veers more toward “look at me” videos than storytelling.

“I was frustrated with the content on Instagram,” Bayouth told TheWrap. “These giant influencers just talking to the camera and they have a huge audience.”

He said he wanted to use the medium to do something with actual writing involved, “not just a dude pointing a camera at his face.”

New “Blark and Son” episodes are uploaded every Monday and Friday. There’s also a Facebook page, but Instagram is its primary home. That’s right in line with its target audience of tweens and millennials, many of whom don’t subscribe to a traditional pay-TV outlet. And befitting an internet native show, “Blark and Son” takes on an unfortunate staple of online culture.

“Son in part represents the internet trolls always correcting everyone,” Bayouth said. “Everyone feels so entitled and they’re all know-it-alls. I thought it was fun to put a face to that kind of person.”

Writing a such a short show is an exercise in avoiding unnecessary buildup or context, Aseraf and Bayouth said.

“Our episodes are really just ideas — they’re a slice of life,” Aseraf said. “It was really kind of what is the fastest way to get to the funniest joke.”

Fitting that all in 30 seconds is challenging enough, but “Blark and Son” was initially supposed to be even shorter.

Also Read: Has 'Hollyweed' Prankster Been Identified on Instagram?

“It was originally intended for Vine — which would have been a terrible investment,” Aseraf said; Twitter shut down the once-popular six-second video platform in January. “Then Instagram video came out and we realized we could go up to one-minute long.”

TV offers a built-in audience to a certain degree, but online shows like “Blark and Son” have to go out and find those viewers. To that end, the team has partnered with popular online personalities like YouTube star Anna Akana on custom content that can be used by both parties to cross-promote.

“Social media is really a different animal than cable and broadcast,” producer Chris Waters told TheWrap. “It’s like a garden you have to water every day.”

Also Read: Dana Brunetti and Roger Friedman Accuse Each Other of Libel in Twitter Spat About Planes

And broadcasting on a social media platform also fosters an interactive audience happy to weigh in on whatever 30-second clip they just saw while avoiding a boring lecture or conversation.

“One of my favorite things to see is a 13-year-old comment on one of our posts, ‘Oh my God, this is my dad!'” Bayouth said. “That’s the biggest win for us.”

As the show moves into its second season, the creators say it will answer a “burning question” about the Blark family. Son will also continue to evolve.

“In season two, we’re going to see Son open up more and [transition] into those preteen years,” Aseraf said. “Crushes on girls. Getting into bands, wearing five shirts and becoming emo.”