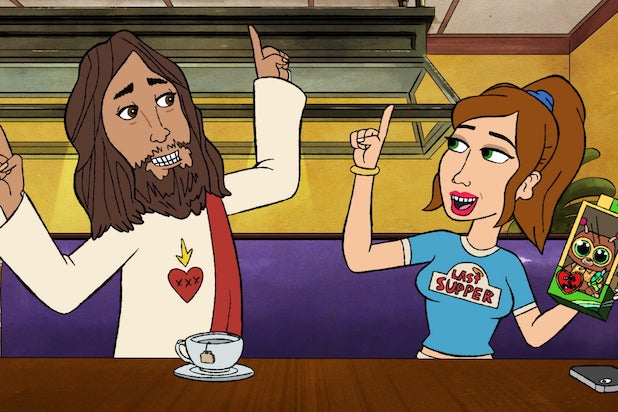 Featuring a voice cast that includes Kristen Wiig, Maya Rudolph, Jillian Bell and Ike Barinholtz, the half-hour comedy follows the Harts, “a Southern family that is always broke and forever struggling to make ends meet. They one day hope to achieve the American dream, but they’re already rich – in friends, family and laughter,” according to Fox.

And along the way, Jenny (Wiig) seeks guidance from her buddy Jesus, voiced by Kumail Nanjiani, who she hangs out with during her breaks while working as a waitress at The Last Supper restaurant.

“And I imagine that Jesus is really there,” she added. “Like, meaning, if somebody was standing outside the restaurant, they wouldn’t just see Jenny sitting there talking to herself. I do believe that Jesus is actually there. I think it’s like a visual representation of prayer, in a way.”

Spivey’s sister is a methodist minster who “advised” her on “how she thinks Jesus would speak to someone and she really stressed that he would be like a friend, like a best girlfriend, or, you know, a BFF. So that’s how I characterized him.”

So why did she pick Kumail to be the voice of God’s son?

“I’m a mega-fan of Kumail’s. And he has this sketch on Portlandia called ‘Around the World in 80 Plates,’ where he played a waiter who was just kind of passive aggressively trying to force and sell appetizers and things onto Carrie [Brownstein] and Fred [Armisen]. And that sort of attitude that was sweet, but like, ‘I’m smarter than you,’ that sarcasm, that was always what I had in mind for Jesus who is sweetly sort of trying to steer Jenny in the direction she should go in without being too overt about it.”

“And Kumail’s timing is so perfect and strange so I always imagined his voice or someone like him when I was writing the character of Jesus,” she added.

“Bless the Harts” premieres during Fox’s “Animation Domination” Sunday night lineup at 8:30/7:30 c, the coveted post-“Simpsons” time slot. That’s an honor that isn’t lost on the creator, who told TheWrap never in her “wildest dreams” did she think she’d have that “opportunity.”

But just because “Bless the Harts” is the lead-out for “The Simpsons” doesn’t mean Spivey has aimed to make her show anything like the long-running cartoon, or anything like Fox’s “Bob’s Burgers” or “Family Guy.” When comparing her series to others, the closest Spivey got was “King of the Hill,” explaining that it’s a realistic portrayal and a very authentic portrayal of a certain place.

“So if ‘King of the Hill’ was Arlen, Texas, ‘Bless the Harts’ is Greenpoint, which is [a fictional town in] North Carolina,” Spivey, who grew up in High Point, North Carolina. “So I think what people can expect is some down-home, down to earth kind of humor. But also there are surreal aspects to the show. Jesus is a character on the show. My hope is you can watch with the whole family and everyone can find something to laugh at. I just want people to watch it the way people used to watch ‘The Andy Griffith Show’ back in the day. There are sweet characters, it’s very humane. I’m excited for people to get to know the place that I grew up basically, ’cause it’s really an homage to where I grew up.”