“Bling Empire” stars Cherie Chan and Jessey Lee have an untraditional relationship for any culture — not just Asian.

Cherie and Jessey are unmarried but have two young kids — a daughter Jadore and a son Jevon, whose delivery room birth was shown on the docusoap. In the season finale, Cherie — frustrated that Jessey still hasn’t proposed yet — literally takes matters into her own hands and asks him to marry him during Jevon’s 100-day party.

The show was filmed pre-COVID in 2019. So did Cherie and Jessey finally wed? 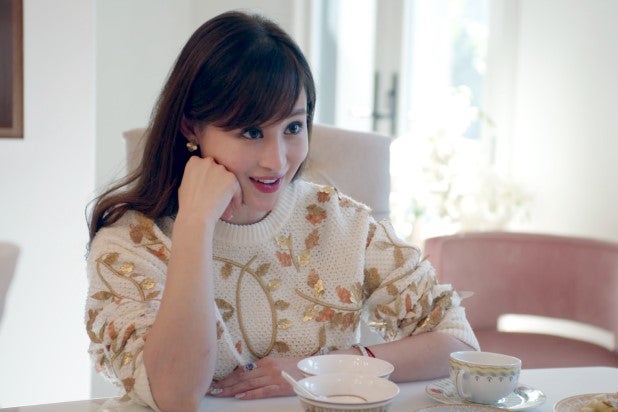 Cherie has waited a long time for Jessey to put a ring on it (Photo: Netflix).

“Well, we definitely are still engaged,” Jessey told TheWrap’s Lawrence Yee on a joint interview with Cherie. “But I still have plans to give Cherie a proper engagement though. That is coming. With COVID it can be a little tricky.”

“But I’m hopeful sometime this year — as COVID settles down with the vaccine — maybe the opportunity for me to actually come through with what I’ve had in my mind — the perfect proposal for Cherie.”

“I really want to do something special,” he added. “Definitely with COVID and the lockdown, it makes it very difficult what I have envisioned.”

“This is all kinda a surprise to me!” Cherie said with a laugh. “I didn’t know he was planning on proposing since I already did it. Yeah, that’d be great if he did actually. We’ve just been doing our daily thing and we never really talk about it so it’d be great if he had something up his sleeve.”

“Oh I do,” Jessey interjected.

As if pulling off a surprise, on-camera proposal wasn’t stressful enough, Jessey was flying back from Singapore and he missed his flight, adding to Cherie’s stress. And while audiences didn’t get to see the ring, Cherie — the consummate fashionista — revealed she bought Jessey a ring from Cartier.

One thing’s for sure; Jadore and Jevon will be part of their parents’ wedding, whenever that may be. Cherie revealed the origins behind their unusual names.

“Jadore came because Jessey wanted names with Js. We wanted a unique name. We felt my name was kinda unique — Cherie — and I have a little bit of French in me, so why not name her Jadore,” she explained. “Jevon was such a good baby. We thought he was literally a gift from God. We wanted a name that symbolized “gift from God” and started with a J. So we did all this crazy research and we thought it was a good name and not a common name.” (Editor’s note: Jevon is Welsh for “gift of God.”)

When asked if they gave their children Chinese middle names — a common practice for Asian immigrants — Cherie said Jevon has one.

“Jadore has a middle name that is named after a flower from a brand our whole family likes: Chanel’s Camellia. So that’s her middle name.”