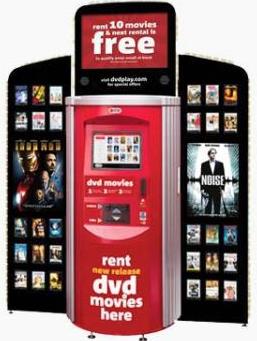 NCR Corp., which recently partnered with Blockbuster on DVD rental kiosks, on Thursday said it had bought out DVDPlay, a privately held company that operates 1,300 DVD rental machines in the U.S. and Canada.

NCR plans to convert the DVDPlay kiosks into Blockbuster Express machines and include them in its revenue-sharing deal with Blockbuster. NCR, a manufacturer of self-service retail devices such as ATMs, will put the Blockbuster brand name on its $1-per-night DVD kiosks.

The move gives a boost to Blockbuster in its effort to challenge Redbox in the DVD rental kiosk business.

NCR last week said it would install 200 Blockbuster Express machines in Duane Reade drugstores in New York City. And Blockbuster said it expects to have 2,500 NCR-operated kiosks around the country by the end of the year.

Challenger Redbox, which has been expanding aggressively, said Thursday that it has installed 22,200 of its $1-per-DVD rental kiosks.