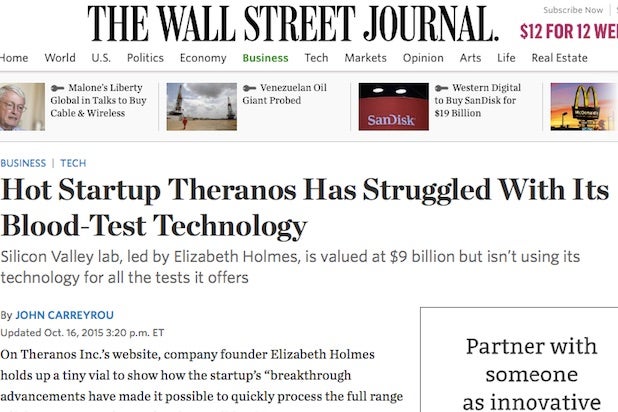 The CEO of blood-testing company Theranos ripped the Wall Street Journal on Wednesday at its own technology conference for “misrepresenting” the company’s testing methods in a recent story.

The Journal’s expose disputed the company’s claim that it employs revolutionary finger-stick testing that only requires a few drops. Instead, Theranos mostly uses traditional lab methods and dilutes samples to create larger volume, the piece reported.

Holmes discredited the paper’s sources, saying one only worked at the company for two months while the others were simple confused about the company’s testing methods.

She also suggested the paper is a tabloid: “I’ve never seen The Wall Street Journal as a tabloid magazine, and to quote a widow is to just really going into an inappropriate area,” she said.

Her company took it a step further on Thursday, writing a blog post that points out what it deemed to be inaccuracies throughout the Journal’s reporting.

“The stories say or imply many things that are simply wrong,” the company wrote. It also criticized reporter for not speaking with well-respected scientists, thought leaders, hospitals and business partners who have worked with Theranos.

It concluded that reporter John Carreyrou intended to write a take down piece from the beginning.

“The reporter made abundantly clear that he considered Theranos to be a target to be taken down, and not simply the subject of an objective news story. The articles that appeared last week are the inevitable product of that approach.”

The Wall Street Journal defended its story on Theranos, issuing the following statement.

Nothing said at the conference by Ms. Holmes refutes the accuracy of the reporting done by John Carreyrou or of the articles, which were subject to the Journal’s rigorous and careful editing process. … We note that Ms. Holmes sought to challenge the reliability of our sources, but it remains the fact that she doesn’t know from whom the information for our articles was gathered. We assure her and our readers that our sources were well positioned to know the information they provided about Theranos, and they were vetted before publication.

Criticism against the Journal comes after Amazon fired back at the New York Times on Monday for what it said was gaping holes in its summer expose that reported on the “bruising” workplace environment at the technology giant.