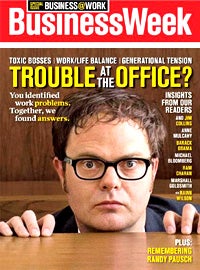 BusinessWeek’s new owners at Bloomberg are getting a first-hand look at how harsh the magazine publishing business can be.

Bloomberg said that it is cutting 25 staffers from Bloomberg BusinessWeek. Most will come from the magazine’s art and editorial departments.

The cuts — which were expected — come as Bloomberg is getting ready to unveil a redesign of the magazine on April 23.

The company bought BusinessWeek from McGraw-Hill in October for about $5 million plus the assumption of debt.

“We are not buying BusinessWeek to gut it,” Bloomberg LP president Daniel Doctoroff assured BusinessWeek.com at the time of the sale. “We are buying it to build it.”

Nevertheless, Bloomberg laid off some 150 staffers in a cost-cutting effort late last year.

There are tens of millions of reasons it did. The magazine was expected to lose $40 million in 2009, a result of a struggling print ad market.

According to the Publishers Information Bureau, advertising pages for BusinessWeek plummeted more than 33 percent in 2009 – or an estimated $73 million in lost ad revenue. (Through March, they’re down 22.4 percent, according to Mediaweek.)

Norm Pearlstine, Bloomberg’s chief content officer and former editor of Time Inc., hinted at the possibility of more cuts in an interview with TheWrap in October. "I didn’t say the magazine has to be profitable,” Pearlstine said. “But we have to run BusinessWeek as a business."

UPDATE: AlleyInsider is reporting that BusinessWeek staffers were forced to evacuate Thursday after a fire broke out on the 43rd floor of the McGraw-Hill Building in midtown, where the magazine’s offices are located. Oh, the irony.