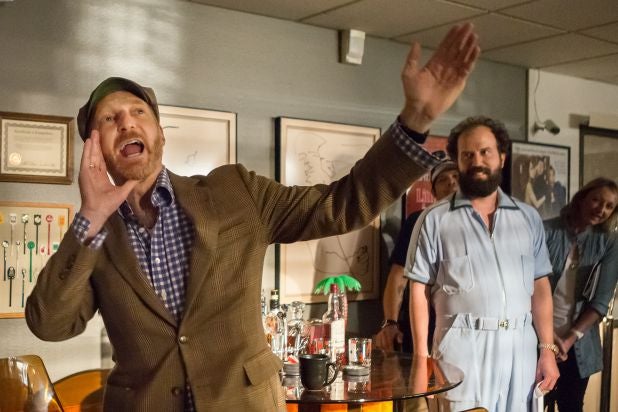 Jonathan Ames was a quintessential New York novelist. In books such as “The Extra Man” and “Wake Up, Sir!” he portrayed what it was like to be young, artistically inclined and maybe crazy in the world’s cultural capital. With the HBO series “Bored to Death,” Ames transitioned from writing prose to writing for television, but kept his New York State of mind–capturing a Brooklyn overrun by able-bodied and idle-handed creative types.

But Ames is now a West Coaster, having abandoned New York for Los Angeles, the setting of his new series “Blunt Talk,” which stars Patrick Stewart as a cable newsman embroiled in controversy and flirting with insanity, and premieres Saturday night on Starz. He doesn’t sound too broken up about the move.

“People here say, ‘I love living in L.A.’ or ‘L.A. is beautiful,'” Ames said. “New York, in part because of climate change and the high rents, has become somewhat uninhabitable.” That anchors such as Larry King and Piers Morgan made L.A. home, he added, made it conceivable that Stewart’s character, Walter Blunt, could do the same.

Ames spoke with TheWrap about how those newsmen and the fictional catalyst of the classic film “Network” influenced “Blunt Talk,” as well as whether “Bored to Death” will ever have a proper ending and how he would fare as a character on “The Walking Dead.”

How much Walter Beale is in Howard Blunt?
There’s definitely some Howard Beale DNA in the conception of Walter Blunt, and the fact that the network is called UBS. I think after the first episode, there’s less Howard Beale, because for a TV show to sustain itself, I can’t have Walter Blunt at the peak of insanity at all times. But I watched “Network” in preparation for writing this, and I was fascinated by Howard Beale. In the movie, we never got to see him in his private moments. We got to see him at the office or broadcasting. We got to see William Holden and Faye Dunaway in private, but I was like, “What’s going on with Howard Beale at home?”

How was the character conceived?
I got an email from my agent saying that Seth MacFarlane wanted to get on the phone about Patrick Stewart doing a comedy. That night, I channel surfed and I caught a glimpse of Piers Morgan at his anchor desk. In that moment, I imagined Patrick Stewart behind such a desk–such an authority figure, so striking, and I just had an inspiration that that could be a great comedy, and that we could live behind the scenes like the old “Larry Sanders Show.” So there’s a dash of Piers Morgan in there, along with Howard Beale, and Larry King with the multiple wives, and some of the strength of Bill O’Reilly. If there’s a pie chart, each of those guys is 10 percent, and the rest is creating a fictional character.

How did [Stewart’s “Star Trek: The Next Generation” co-star] Brent Spiner’s cameo in the pilot come about?
One night I had drinks with Patrick and a lot of the crew of the Enterprise–Michael Dorn, who was Worf, Jonathan Frakes, Riker, and then Brent Spiner, Data. I saw these guys, and I thought, “Oh my god, they are all so interesting and strange and unique.” And in that moment I thought, “I want to cast all of them in ‘Blunt Talk’ in cameos.” Timing wise, schedule wise, hopefully in Season 2 I’ll be able to cast these other fellows. But Brent, I knew through a mutual friend that he was a musician. As soon as I met him in person, I thought that there was a real melancholy to his face or to his eyes, and I thought he would make a great lounge piano player. Brent reappears in episode 5 and episode 9, so he’s got a season-long arc.

So we might see cameos from the other “Star Trek” actors later on?
Definitely. I met LeVar Burton at our premiere party. I want to get him on.

Also Read: 'Flesh and Bone' Cast and Creators on Getting to the Underbelly of Ballet: 'We Ripped the Band-Aid Off'

You’re now spending more time writing TV than books. What TV do you watch?
The only show I watch or have any kind of obsession with is “The Walking Dead.” I just love the family of “The Walking Dead,” and I have my own hero fantasies that Rick would take me under his wing and I would be with them all. I would be adept at killing zombies and a fast runner and selfless and just a really good member of the community. I was into “Game of Thrones,” but I didn’t want to wait a year for the next installment, so about after a year or two of watching it, I thought, “Oh, forget it, I’m getting the books.” Now I don’t really want to watch the show. I’m now just waiting for the next book.

As a prose author, if you were running “Game of Thrones,” would you feel obligated to stick to the story of the books, or would you want to take it in your own direction?
I think they’ve done a brilliant job at adapting an extremely huge world. They’ve streamlined some storylines. They’ve also, and I didn’t see it because I never would want to, I guess they had Sansa raped. I can’t ever watch that–not only because I wouldn’t want to watch that happen to Sansa, but also because it didn’t happen in the book. So it would be like a double horror.

There’s been talk in the past about a “Bored to Death” movie. Is that still possible, or is it done now?
I don’t think it’s done. I’ve written two drafts of a script that didn’t quite work. I have an idea for a third version. When I get a bit of time, I may as well try. I don’t want it to in any way take away from the pleasure people received from the show. I would say it’s not over, but I can’t guarantee that it’s going to happen.