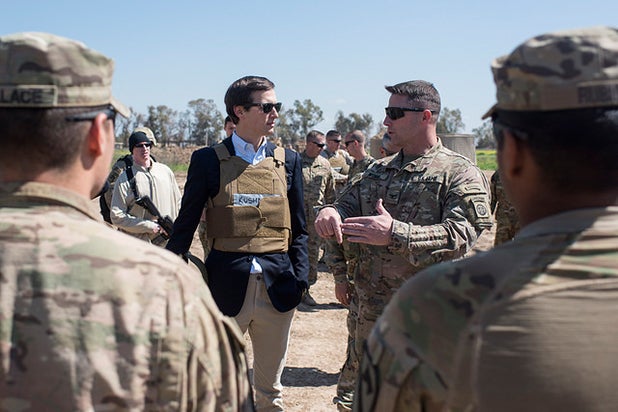 Deadspin and the rest of the Gizmodo Media Group aren’t known for holding back when it comes to political coverage, and that was extra true Thursday when covering President Trump’s son-in-law, Jared Kushner, visiting the Middle East.

The story, written by columnist Drew Magary, highlights a photo posted by the Chairman of the Joint Chiefs of Staff Flickr account on Tuesday. In it, we see Kushner, who is now a senior adviser to his father-in-law, meeting with military service members, the ambassador to Iraq, and other officials at an operating base near Qayyarah West in Iraq.

“Look At This Fucking A—hole,” the headline states.

Also Read: Steve Bannon Called Jared Kushner a 'Cuck' Behind His Back (Report)

Magary — along with some Flickr commenters — noted how awkward Kushner looks in a bulletproof vest, especially when compared to the military officials standing around him in fatigues. It doesn’t help that he’s wearing the vest over a blazer, which isn’t a good look.

He ends the article with a blunt exclamation: “What a piece of s—.”

Deadspin and Magary aren’t the only ones on the internet to point out how strange Kushner looks in the photo.

“Thankfully mommy wrote his name on his bulletproof vest,” one commenter wrote on Flickr.

Every time I see that photo of Kushner in his bulletproof vest & blazer all I can think is "It's my uniform, Mother. From Army."

2/ Jared Kushner’s blazer isn’t the deeper point but it sure as hell emphasizes the bullshit of his visit to troops deployed overseas.

Found one more photo of Jared Kushner in Iraq pic.twitter.com/0u7yQB5cSO

“Look how badass I look in this flak jacket,” he wrote. “I totally want one.”

This isn’t the first time this week that Kushner has been the subject of a news story where he’s being mocked. According to a report, Trump adviser Steve Bannon called Kushner a “cuck” behind his back.