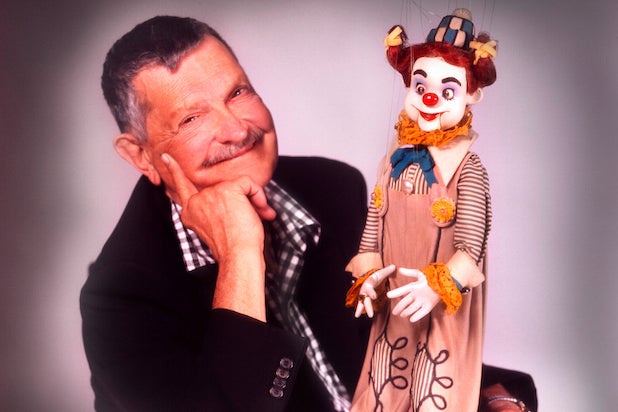 Baker’s puppetry was featured in several films, including Disney’s “Bedknobs and Broomsticks,” for which he earned an Academy Award, “Close Encounters of The Third Kind,” 1954’s “A Star Is Born” with Judy Garland and many television shows, including KFI’s “Adventures of Bobo,” and commercials.

His Santa Monica studio became a creative haven and workspace for other talented puppeteers and artists, including Bob Clampett, the creator of “Beany and Cecil,” and voice actors Daws Butler, Stan Freeburg and June Foray.

Along with his partner Alton Wood, Baker founded the Bob Baker Marionette Theater in 1963, one of the oldest and longest-running children’s theater companies in the world and has become a cultural institution for many LA residents. In June 2009, the theater was designated as a Los Angeles Historical-Cultural Monument.

Early in his career, the Hollywood High School graduate served as an Army Air Corps soldier before becoming an animation apprentice at the George Pal Studios. After a year as an apprentice, he became a top animator of “Puppetoons.”

He left George Pal Studios during a labor dispute in which he sided with Pal, which made his job difficult to perform. He would then go on to manufacture toy marionettes, which were sold in the finest department stores in both the U.S. and Europe. His window displays in L.A. stores would attract huge crowds and led to creating the famous window displays on Main Street at Disneyland.

Baker would also would become instrumental in convincing Ronald Reagan, president of Screen Actors Guild in the late-1940s and 1950s, that puppeteers belonged in the performer’s union.

The trailblazing puppeteer is “survived by friends and loved ones, his devoted employees over the years, and his hand crafted marionettes, according to his representatives.

In lieu of flowers, donations to support the Bob Baker Marionette Theater may be made by visiting GoFundMe.com.