The comments came during a lengthy, free ranging talk between Maher and Costas. Costas said the Tokyo games should be “postponed, not canceled. If they postponed it until the summer of 2022, then as a one-off it would go back to the way it was prior to the ’90s,” by which he meant holding the winter and summer games in the same calendar year.

Costas has some authority when it comes to the Olympic games. He was NBC’s primary host for 12 separate Olympics. But he’s far from alone in his thinking. The Tokyo Doctors Association said earlier this month the games should be canceled due to the very real risk of causing a new COVID-19 outbreak. And a Reuters poll found that 70% of Japanese companies agree. 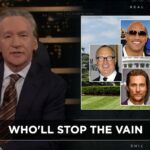 In response, Maher flat out asked Costas if it’s wrong to think the IOC is “shady.” Costa’s blunt answer: “It’s not wrong. They have an affinity for authoritarian regimes. They’ll be back in Beijing for the Winter Olympics. They were in Sochi (Russia) in 2014. They were in Beijing in 2008.”

Costas also pointed out that “all of the contracts are written in favor of the IOC. So, if the Olympics are held, all the losses, all the cost overruns, they fall on the Olympic organizing committee of Tokyo. None of that is borne by the IOC. Plus, if the Games take place and NBC televises them, the IOC collects every last penny of the broadcast rights. So you can’t expect them to have the same view as everyone else.”

You can watch the full interview with Costas above right now.