Bob Dylan stands accused in a new lawsuit of sexually assaulting a 12-year-old girl over a six-week period in 1965.

According to a lawsuit filed in Manhattan Supreme Court on Friday, the woman (now 68 and identifying herself only as “J.C.”) says Dylan plied her with drugs and alcohol and “exploited his status as a musician by grooming J.C. to gain her trust and obtain control over her as part of his plan to sexually molest and abuse J.C.”

The alleged abuse, which J.C. says happened “multiple times,” took place between April and May of 1965. She says she suffered depression, humiliation and anxiety as a result of the alleged abuse, all of which “are of a permanent and lasting natures and have incapacitated plaintiff from attending her regular activities.” 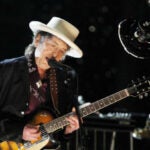 A representative for Bob Dylan told TheWrap, “The 56-year-old claim is untrue and will be vigorously defended.”

J.C. is suing for assault, battery, false imprisonment and infliction of emotional distress. She is seeking unspecified damages.

The lawsuit was filed under New York’s Child Victims Act which temporarily removed the statute of limitations on alleged abuse claims so that victims of child sexual assault could file claims against their abusers. It officially ended on Saturday, the day after the lawsuit was filed.