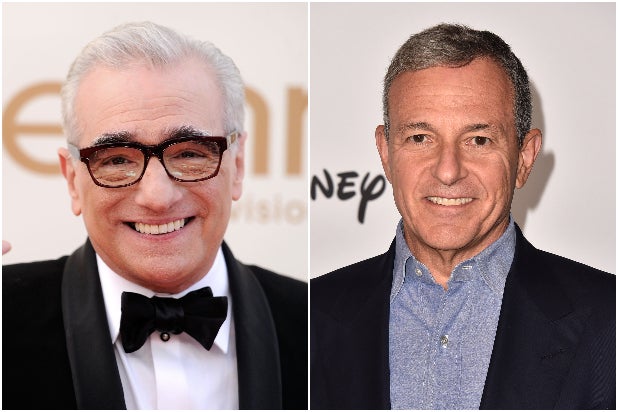 Disney CEO Bob Iger and filmmaker Martin Scorsese are arranging a meeting to discuss the auteurs Marvel comments according Time. Iger, who was just named Time’s Buisness Person of the Year added that Scorsese’s comments were “nasty” and “not fair to the people who are making the movies.”

“If Marty Scorsese wants to be in the business of taking artistic risk, all power to him,” added Iger. “It doesn’t mean that what we’re doing isn’t art.”

Back in October, Iger got heated on the subject as part of the WSJ Tech Live after both Scorsese, Francis Ford Coppola and a handful of other auteur filmmakers have criticized the Marvel movies, with Coppola most recently calling the films “despicable.”

“I’m puzzled by it. If they want to bitch about movies it’s certainly their right. It seems so disrespectful to all the people who work on those films who are working just as hard as the people who are working on their films and are putting their creative souls on the line just like they are,” Iger said of filmmakers’ comments. “Are you telling me that Ryan Coogler making ‘Black Panther’ is doing something that somehow or another is less than anything Marty Scorsese or Francis Ford Coppola have ever done on any one of their movies? Come on.”

Iger says he holds Coppola and Scorsese in “the highest regard,” but he took issue with Coppola’s characterization of the films as “despicable,” and that he’d only reserve that word “for someone who had committed mass murder.”

“When Francis uses the words ‘those films are despicable,’ to whom is he talking? Is he talking to Kevin Feige who runs Marvel, or Taika Waititi who directs or Ryan Coogler who directs for us or Scarlett Johansson,” Iger said. “I don’t get what they’re criticizing us for when we’re making films that people are obviously enjoying going to because they’re doing so by the millions.”

Scorsese recently doubled down on his comments when he said that Marvel movies were not cinema and compared them to “theme parks.” He ultimately said that Marvel’s films were “invading” movie theaters and replacing what young people’s idea of cinema is, even driving out smaller films and more human stories from the popular culture.