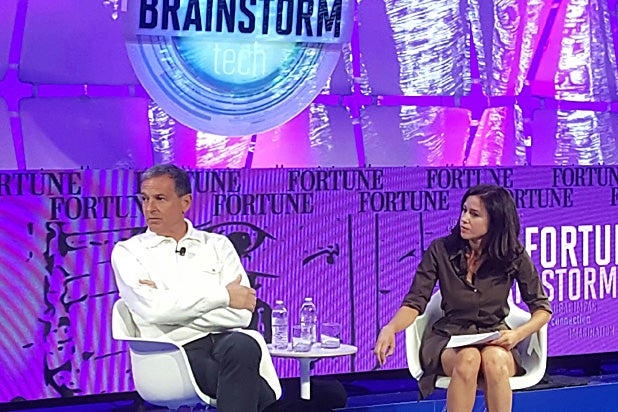 Walt Disney Co. CEO Bob Iger said on Monday that the ambitious new Disneyland park in Shanghai, China, was not only the company’s biggest investment in a theme park, but also sparked concern in him that he might be branded a “cultural imperialist” in building it.

The Shanghai park, which opened in the middle of June, has already welcomed 1 million attendees, Iger said, with people staying two hours longer per day than anticipated.

“It’s our largest-ever foreign investment,” he explained, while speaking at the Fortune Brainstorm Tech conference in Aspen, Colorado. “It’s one of the biggest investments we’ve ever made.”

Iger said he spent 18 years trying to bring this idea to life. “It was a 10 year negotiation,” he recalled, and a personal exercise in patience.

Foremost in Iger’s mind was tailoring the American theme park to China’s culture. “I coined the phrase, ‘Authentically Disney, Culturally Chinese,'” he recalled. “I wanted very much to avoid being called a cultural imperialist. I wanted to bring to China something that they thought was theirs.”

In that spirit, Disneyland in Shanghai has no Main Street, one of the American and even European theme park’s signature sets. “I didn’t think that would resonate at all in 2016,” he said.

The park also serves mainly Chinese food — with a couple of exceptions. He explained: “We agreed that 70 percent of the food was Chinese, 20 percent other Asian and 10 percent American — pizza, hamburgers. Then they snuck in churros and turkey legs.”

“We decided to introduce turkey legs to China,” Iger revealed. “Which I thought was a mistake. But we’re selling 3,000 a day.”