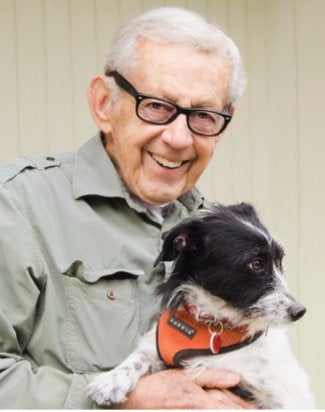 Bob Palmer, beteran publicist and founder of Bob Palmer Public Relations, died on Monday, Sept. 15, after a brief illness. He was 85 years old.

Through his own firm, Bob Palmer Public Relations, he represented many celebrities including Faye Dunaway, Sada Thompson, David Soul, Peter Strauss and Michele Lee. Most recently he had been representing his long-time friend and client Dick Van Dyke.

Just this past March, Palmer was talking about the 86-year-old Van Dyke’s marriage to 40-year-old Arlene Silver. “”It’s a really nice relationship, most people like her a lot,” Palmer told ABC News of Silver. “Despite their obvious age difference, Dick has never been happier. She brings a lot of light into his life.”

Palmer was still working on his memoir, with the working title “Bogie’s Bike,” when he passed. The unfinished book is comprised of a collection of essays about his lifelong love affair with Hollywood and all the glitz and glamour it represents.

He was perhaps best known for orchestrating a highly successful campaign for Anthony Hopkins after “Silence of the Lambs.” Hopkins would go on to win the Oscar for his now iconic and chilling portrayal as the serial killer cannibal Dr. Hannibal Lecter.

Born in Ketchikan, Alaska, Palmer grew up in Los Angeles in the 1930s. He studied journalism at Los Angeles City College and began his publicist career at 20-years old in San Francisco for a theater chain. By the age of 22, he was the director of publicity and advertising for United Paramount.

He helped create campaigns for Bay Area premieres of major films of the time, as well as stage shows starring the likes of Lucille Ball, Desi Arnaz, Les Paul and Patti Page.

Palmer met and married Nancy Sidenberg before being called up to active duty for the Korean War. The couple wound up on a submarine base in Connecticut, where he reported on the world’s first nuclear-powered submarine.

After two years, he moved to Los Angeles and started working for the American Broadcast Company as ABC Radio’s West Coast publicity director. Shortly thereafter, he shifted to the television side as a senior publicist, working on hit shows like “Maverick,” “77 Sunset Strip,” “Cheyenne,” and “The Alaskans.”

After working for ABC, he spent much of the 1960s working for various studios, promoting shows ranging from “Bewtiched,” “I Dream of Jeanne,” and “The Monkees” to “Marcus Welby, M.D.” “Charlie’s Angels,” and “The Love Boat.”

Palmer is survived by his daughter Tracy, son-in-law James Metzger and three grandchildren. A memorial service is set for Oct. 11 at 11 a.m. at the Parish of St. Matthew in Pacific Palisades. In lieu of flowers, the family asks that donations be made to Clare Foundation in Santa Monica.