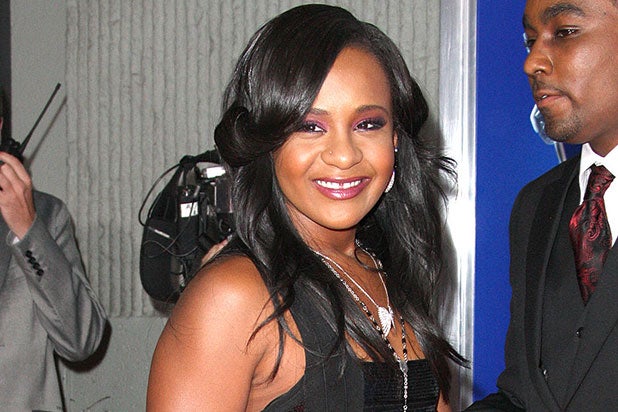 The National Enquirer has published what it claims is the last photo of Bobbi Kristina Brown, the ill-fated daughter of Bobby Brown and Whitney Houston.

In what it calls a “blockbuster world exclusive,” the tabloid features a photo of Brown “taken just before she died” on the cover of its latest issue.

In an added dash of ghoulishness, the cover also features an image of Whitney Houston in her casket, which was initially published by the Enquirer following Houston’s death in 2012.

The 22-year-old Brown died July 26 in a Georgia hospice, following six months of clinging to her life after being found face-down and unresponsive in the bathtub of her Georgia home on Jan. 31.

Brown’s aunt, Leolah Brown, vented about the existence of photos of Brown in the hospice that  were being shopped to media last month, vowing to expose the person who was hawking the photos.

“YOU will not do to my niece what YOU did to Whitney! Everyone knows who YOU ARE!” Brown ranted in a Facebook post.

A representative for Bobby Brown and Pat Houston has not yet responded to TheWrap’s response to the publication of the photo, and Leolah Brown has so far remained silent on the photo’s publication on her Facebook page.

However, in a post published Thursday, Leolah Brown continued her feud with Bobbi Kristina’s other aunt Pat Houston, who she had earlier accused of using her niece’s name for her personal gain.

In the post, Brown thanked her Facebook friends for their support through “all this drama” surrounding Bobbi Kristina and refuted reports that she was “‘put’ out” of Bobbi Kristina’s funeral on Saturday.

Then she once again took aim at Pat Houston.

“Lastly, Please be aware that this IS NOT OVER with Mrs. Pat Watson Garland and I. There is so much more to come. The world will hear THE TRUTH by Me. Make no mistake about that,” Brown wrote.”BOBBI KRISTINA AND WHITNEY HAVE NOT LEFT US IN VAIN!”

Brown concluded the post, “May God continue to use me as a vessel to bring the truth to light! Peace…”