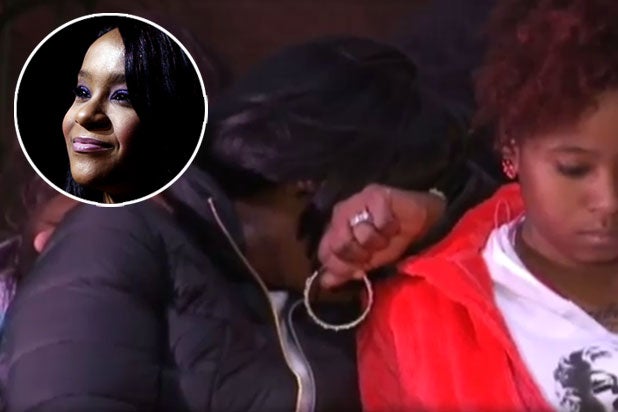 The spirited gathering was held in the city of Riverdale, Georgia, as the 21-year-old daughter of Whitney Houston and Bobby Brown clings to life at nearby Emory University Hospital in Atlanta.

“Sometime people ask you, or they say, ‘I know how you feel.’ Sometime they don’t. Sometime they don’t know what it’s like if your child is on that ventilator. ‘What do I do? If I take it off and she could have lived or do I let her stay on it and suffer?’ That’s a hard question for any parent,” Wynn-Dixon told the large crowd of fans and concerned residents.

Her comments seemed to confirm what has been widely reported by the media that Bobbi Kristina is connected to a ventilator, and her family faces a decision whether or not to remove her from life support.

Before the service began, organizers played several of Houston’s hit songs including “I Have Nothing” and “I’m Every Woman.”

Once the gathering got underway, a series of family friends and ministers addressed the crowd with words of encouragement including “we’re here to pick people up” and “continuous prayer is what is needed at this point.”

As the vigil came to a close, legendary R&B singer Tony Terry took the microphone and sang “I Look To You,” Houston’s last attempt at a comeback single before her death in 2012.

Several people in the crowd were brought to tears while Terry belted out the stirring track, which is a call for help in a time of crisis.

Riverdale organized the “Shining A Light For Healing For Bobbi Kristina Brown” vigil to support the Brown family, because Bobby Brown was the first artist to perform at its amphitheater, a city official told several media outlets.

Bobbi Kristina was rushed to the hospital after being found face down and unconscious in a bathtub on January 31.