Bobby Flay has been cast as the first of five key restaurant/business leaders and judges for NBC’s reality/competition series "America’s Next Great Restaurant.," premiering next season.

Originally called "United Plates of America," the show will feature contestants vying for the opportunity to open a new restaurant chain in three U.S. cities. 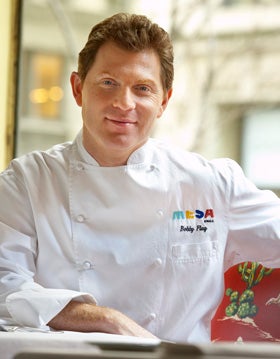 Chef/restaurateur Flay (“Iron Chef America: The Series”) will kick off the first in a series of open casting calls on March 19-20 in New York City. From there,casting teams set out on a cross-country bus tour in search potential contestants.

Participants do not need to have any cooking or restaurant experience — just a great idea for a unique restaurant concept.

Thousands of ideas will be narrowed down and then each week the investors will put the chosen few through rigorous challenges to discover which contestant’s concept has the greatest potential for success. Flay and the other judges will select the winner and invest their own money in the final restaurant chain.

Interested applicants for the series should log onto nbc.com/casting to pre-register for an open casting call at one of the eight stops on the nationwide casting bus tour. Along with a completed and signed application and a photo ID, casting teams want applicants to bring anything they feel would help pitch their restaurant concept. Elements could be visual, edible or even wearable and applicants will have a limited time to pitch their idea.

Visitors also can follow the bus tour on Twitter @magicalelves with photos and video, and also at NBC.com/americas-next-great-restaurant.