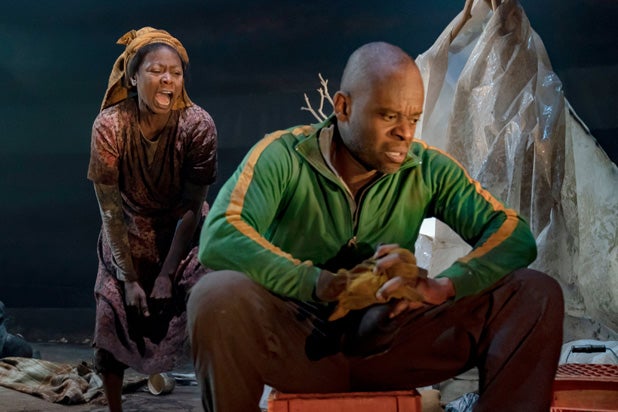 It’s been 50 years since Athol Fugard first staged “Boesman and Lena,” his searing look at a “colored” man and woman in apartheid-era South Africa who have been forcibly evicted from their shanty home, for the umpteenth time. In director Yaël Farber’s deliberately discomfiting new revival, which opened Monday at Off Broadway’s Signature Theatre, the drama plays less as history than as allegory.

Indeed, Farber’s production calls to mind Samuel Beckett, both in its embrace of poetical abstraction and in its physical look. Susan Hilferty‘s set design, with its dirt-strewn floor and barren tree stage right, could easily hold a production of “Waiting for Godot.”

But Fugard’s play is deadly serious — there is none of the clowning or slapstick of “Godot” — and Farber takes a similarly sober approach to the material: Sahr Ngaujah’s Boesman and Zainab Jah’s Lena enter the theater through the audience, weighed down by boxes and sacks and pans representing all the possessions they managed to take with them, until they deposit themselves in the barren mudflats of the stage.

Like Vladimir and Estragon, they are given to bickering — after many years together, and shared tragedies like lost children, they know what buttons to push with each other.

But there is a darker edge here, as Fugard does not depict his title characters as saintly victims of an unjust system. We learn early on that Boesman regularly beats Lena — we see her bruises — and that she too is not above provoking his jealousy and rages in ways that put him in jeopardy in a racist society.

Like many a survivor of domestic violence, she feels both bound to her oppressor and wanting to challenge him. As they are setting up camp, Lena calls over an older black tribesman (Thomas Silcott), whose Xhosa-language speeches she doesn’t even understand — and invites him to stay with them, offering her own share of food.

Jah and Ngaujah are fully committed to these roles, and they don’t let anyone off the hook — not each other and not the audience, whom they stare down at several points in the intermissionless production, even during the curtain call.

At one point, Lena speaks of a dog she once had. “I called him Dog,” she says, “another pair of eyes, something to see you.” The old tribesman plays a similar role for her — as do we in the audience. It’s as if she needs someone to bear witness, to validate her identity.

“Boesman and Lena” initially may have been staged as an indictment of South Africa’s treatment of its nonwhite citizens. But over time, it has grown into a searing look at how institutional racism can sour our very humanity.