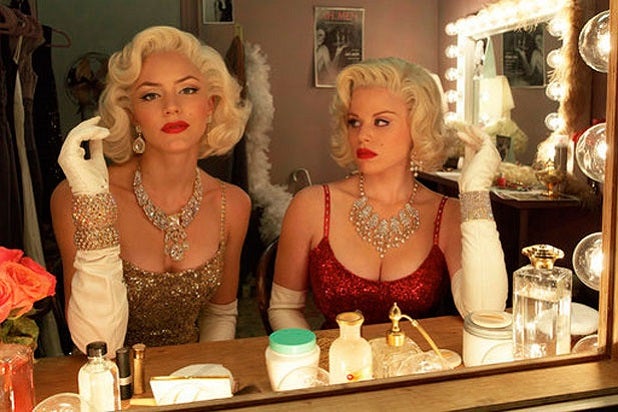 “Bombshell” may make it to Broadway after all. A stage adaptation of the defunct NBC series “Smash” about the making of a Broadway musical is in the works, with Steven Spielberg, Robert Greenblatt and Neil Meron as lead producers.

The Tony- and Grammy-winning duo of Marc Shaiman and Scott Wittman, who wrote over two dozen songs for the TV show will provide the score. The musical’s book will be co-written by Tony winner Bob Martin (“The Prom,” “The Drowsy Chaperone”) and Rick Elice (“Jersey Boys,” “Peter and the Starcatcher”). Emmy-winning choreographer Joshua Bergasse will handle the dancing in the show.

Many of the songs that Shaiman and Wittman wrote for “Smash,” including the Emmy- nominated “Let Me Be Your Star,” will be used in the stage musical. While the story will generally follow the rollercoaster ride of mounting “Bombshell” (the Broadway musical-within-the-musical about the life of Marilyn Monroe), the stage musical will depart liberally from the series. The characters Julia and Tom (the writers), as well as Ivy and Karen (the stars) will still be central to the storyline, but all other details are being kept under wraps.

“Smash” ran for two seasons, from 2012-13, and became a cult favorite despite mostly middling ratings. A 2015 benefit concert of the cast performing songs from “Bombshell” sold out in 15 minutes, and a filmed version of the performance was streamed this week on People.com as a coronavirus benefit for The Actors Fund.

Meron has collaborated previously with Shaiman and Wittman, first on the film version of their musical “Hairspray.” Meron and Greenblatt are also currently working with them on the upcoming musical adaptation of “Some Like It Hot” which is aiming to open on Broadway in the fall of 2021.

The songwriters previously adapted Spielberg’s 2002 film “Catch Me If You Can,” which opened on Broadway in 2011. Their other musicals include “Mary Poppins Returns,” “Charlie and the Chocolate Factory” and “Martin Short: Fame Becomes Me.”

Theresa Rebeck was the creator and executive producer of “Smash.” Executive producers also included Steven Spielberg, Neil Meron and the late Craig Zadan, Shaiman and Wittman, Darryl Frank and Justin Falvey, and Joshua Safran. It was produced by Universal Television in association with DreamWorks Television and Storyline Productions.