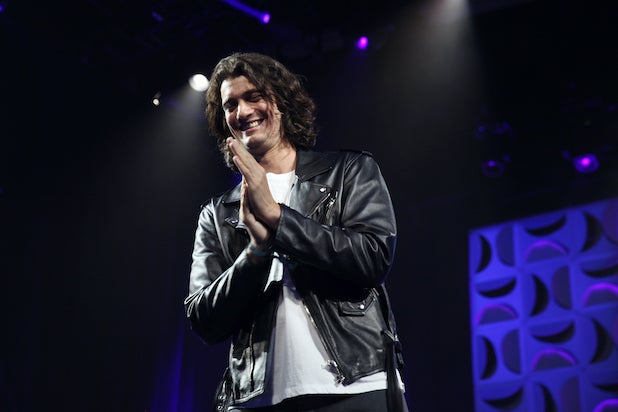 “Bombshell” writer Charles Randolph is set to write a feature film based on the rise and fall of WeWork and its CEO and founder Adam Neumann that is being fast tracked at Blumhouse Productions and Universal, TheWrap has learned.

Blumhouse will produce and is adapting the film based on the reporting and an upcoming book by journalist Katrina Brooker. The film will chart the intertwined lives and ambitions of Masayoshi Son, the CEO of Softbank, and Neumann, who from 2010 to 2019 was the CEO of the commercial real estate company WeWork that has been the subject of scrutiny following a failed IPO. Randolph will also produce.

Brooker, who is a senior contributing writer for Fast Company and the author of an upcoming book on WeWork to be published by W.W. Norton, has conducted in-depth interviews with Neumann and dozens of sources within SoftBank and WeWork that have delved into Neumann’s eccentric behavior, the fallout of WeWork’s IPO after initially being valued at $47 billion and the crisis around SoftBank’s $100 billion Vision Fund. Brooker’s work has also appeared in Vanity Fair, the New York Times, Fortune and Bloomberg.

Randolph is an Oscar-winner for “The Big Short” and wrote this year’s upcoming “Bombshell” starring Charlize Theron, Nicole Kidman and Margot Robbie. The film directed by Jay Roach and to be released by Lionsgate details Roger Ailes’ downfall at Fox News amid sexual harassment accusations.

Blumhouse is also at work developing a New York Magazine cover story by Ezra Marcus and James D. Walsh, “The Stolen Kids of Sarah Lawrence,” into a film and TV project.