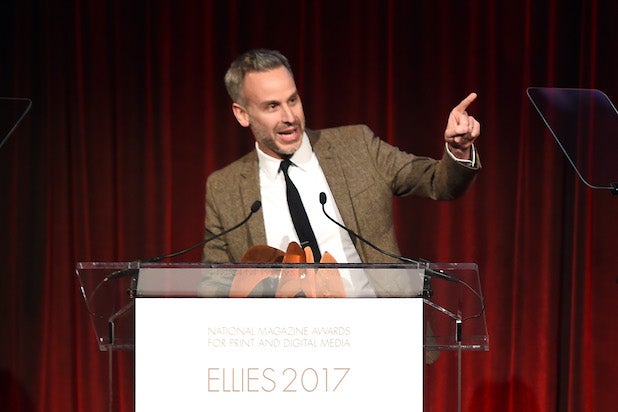 Bon Appétit’s editor in chief, Adam Rapoport, will be resigning from his position after an old Instagram photo of him in brownface resurfaced on Monday and quickly drew backlash.

“I am stepping down as editor in chief of Bon Appetit to reflect on the work that I need to do as a human being and to allow Bon Appétit to get to a better place,” Rapoport shared in an Instagram post. “From an extremely ill-conceived Halloween costume 16 years ago to my blind spots as an editor, I’ve not championed an inclusive vision. And ultimately, it’s been at the expense of Bon Appétit and its staff, as well as our readers. They all deserve better.”

Though the photo drew condemnation from BA staffers, it also led to a larger discussion on social media surrounding the culture at the magazine and how non-white staff members are compensated and treated.

Assistant food editor Sohla El-Waylly, who had called for Rapoport’s resignation earlier on Monday, said that only white BA editors have been compensated for appearing in video content on the magazine’s popular YouTube channel, whereas none of the people of color have.

El-Waylly’s comments also led other popular hosts on the channel, including senior food editor Molly Baz and food editor Carla Lalli Music, to say they would not be appearing in any more videos until their BIPOC colleagues were compensated equally and fairly for appearing in videos.

Alex Lau, a former senior staff photographer for BA, also criticized the magazine’s lack of diversity in the “restaurants/communities” it represented and said one of the “main reasons” he left was because “white leadership refused to make changes that my BIPOC coworkers and I constantly pushed for.”

“i’ve been quiet about this for so long, because i always thought that i could actually change the organization from within. but i was wrong, and quite frankly i am so glad that the internet is going after BA and holding them accountable,” Lau wrote in a Twitter thread. “this is the only way that change can happen. call out the leadership of your favorite publications if you see something wrong. if they silence you, do NOT back down. there is strength in social media, strength in reader responses.”

Molly Pacala, a spokesperson for Condé Nast and Bon Appétit, said the company was “dedicated to creating a diverse, inclusive and equitable workplace.”

“We have a zero-tolerance policy toward discrimination and harassment in any forms. Consistent with that, we go to great lengths to ensure that employees are paid fairly, in accordance with their roles and experience, across the entire company,” Pacala told TheWrap in a statement. “We take the well-being of our employees seriously and prioritize a people-first approach to our culture.”