I can’t remember the name of that concept — Skirts for Stocks? — but it was true. Coming out of WWII, women wore long pencil skirts for their jobs as executive assistants. As the economy improved in the ’50s — and the stock market rose, skirts got shorter and more "swingier" … just look at any old Elvis Presley movie (or "Mad Men.") As they did, the economy picked up, as did the stock market. 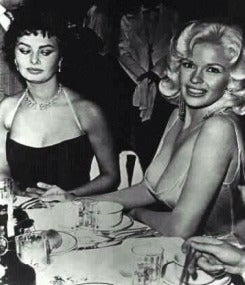 Suddenly, short skirts were in (check out any early Beach Boys video) — and the stock market went through the roof! That was, of course, the early ’60s — prior to Vietnam, inflation, Nixon … you get the picture. By 1970, miniskirts were out and "maxiskirts" were in — the ones that ran all the way down to the ankles! And the economy and stock market were in the toilet.

Cut to a decade later, Reagan’s dumping billions into the economy (running up the biggest deficits in history) and suddenly the club kids are all wearing skirts shorter than their underwear (only to be supplanted a decade later by Britney Spears, et al., who didn’t even wear underwear … as numerous paparazzi photos revealed.)

But then, reality set in, the stock market crashed from 14,000 two years ago (when Britney was sporting no undies) to 7,000 earlier this year, when Michelle Obama was suddenly wearing below the knee skirts. So maybe there’s something to that theory.

Anyway. I have a better theory — and more relevant for our times. With all of our Hollywood producers’ 401(k)s "underwater" (don’t actually look online, it’ll make you sick; and forget your kids’ 529 college accounts — they’re gone!) let’s look at Tinsel Town’s role in this, specifically, its role in promoting (well, how else to you say it?) boobs — and, yes, you can now all send in your comments about producers being boobs.

But producer boobs aren’t what I’m talking about here. The reality is — and it’s true — ever since the invention of "breast enhancement" surgery, boobs have been a "leading indicator" for the economy. I mean, please, do you think we could have won WWII without Howard Hughes’ steel bustier for Jane Russell in 1943"s "The Outlaw"? Just compare her to the stars of the Great Depression, all of whom, like the economy, were, well, flat.

Myrna Loy didn’t even need to wear a brassiere; Bette Davis had eyes, not boobs. And even the stars of the biggest movies were either children (Judy Garland) or "Gone With the Wind"’s, Vivien Leigh and Olivia de Havilland, who didn’t have a B cup between them.

As soon as the war ended, technology took over — Marilyn Monroe was maybe the first "early adopter" (as they say today) of the new technology, not only having her breasts enhanced to become a star, but her chin as well. As her career — and the economy — took off, she was quickly followed by imitators like Mamie Van Doren (notice the sly "mammary" hook!) and Sophia Loren (who can ever forget that famous picture of Sophia looking down Mamie’s dress at dinner in astonishment?). By the early ’60s, as the stock market was a roaring bull and the economy was through the roof, boobs were further penetrating Hollywood — anyone checked out the cleavage in "Faster, Pussycat! Kill, Kill" or "Beyond the Valley of the Dolls" lately?

Of course, just as with skirts, the onset of Vietnam, (real) inflation and Nixon brought the boob business back to earth. The biggest stars of the late ’60s and early ’70s were "A" cups like Twiggy.

In fact, some economists contend that it was only when that harbinger of culture, Sports Illustrated, started to feature large-breasted women like Cheryl Tiegs, Christie Brinkley and Kathy Ireland in the early ’80s that the economy recovered. To wit: The economy grew at a 20-year run as long as boobs were up — who could forget the young Jennifer Connelly full-frontal in "The Hot Spot" or the multi-enhanced Denise Richards in "Starship Troopers." That’s when the stock market hit its heights.

Then, suddenly, it was over — after winning her Academy Award, Connelly discreetly had the implants removed, as did Richards after having two kids. They’ll all say it was just from breastfeeding — but wasn’t it Demi Moore and Anna Nicole Smith who claimed breast feeding explained their sudden "enhancement" in the early ’90? You can’t have it both ways — as Meg Tilly says in the recent movie "Opposites Attract": "Whatever happened to my tits? … This whole ‘breast feeding’ thing is a sham!"

The stock market had a recent blip when, as her father calls her, "Double D" Jessica Simpson remade "The Dukes of Hazard," but with the bombing of that movie (not to mention her new Mommy-jeans) — let alone Tony Romo dumping her–the stock market has fallen on hard times.

And I wouldn’t buy stocks anytime soon — not with the hottest movies featuring such, shall we say, Stacey Snider look-a-likes as the flat-chested duo of Jennifer Garner and Kate Hudson.

Until we get back to some serious boobs, well, we’re all going to be boobs. And if you don’t believe me, call your stockbroker. And have him tell Hollywood to get back to big-busted blondes — that’ll save the economy better than any stimulus package. Oh, Pam Anderson, where are you now that we most need you!!!!