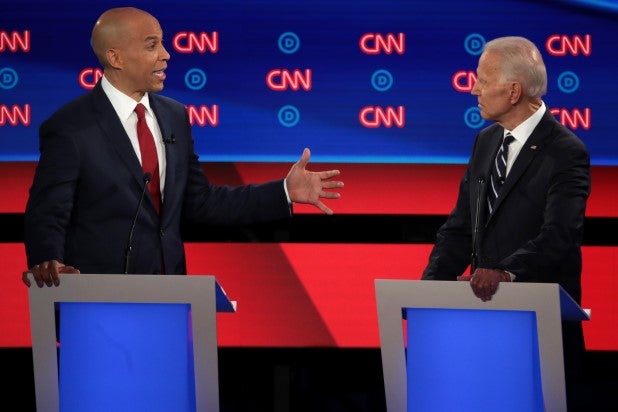 As CNN’s Democratic debates moved to the question of immigration reform Wednesday night, candidates Cory Booker, Bill de Blasio, and Joe Biden got into a heated exchange about how the former vice president invokes his time in the Obama administration

De Blasio began by criticizing Biden’s explanation for how involved he was in the deportations which took place during the Obama administration. Turning to Biden, the mayor of New York said, “Mr. Vice President, if you want to be the president of the United States, you have to be able to answer the tough questions. I guarantee you, if you’re debating Donald Trump, he’s not going to let you off the hook.”

Biden responded by emphasizing that he was the vice president, not the president, and that he would keep his recommendations to Obama “private.” But Booker took the opportunity to jump on his response: “You can’t have it both ways. You invoke President Obama more than anybody in this campaign. You can’t do it when it’s convenient and then dodge it when it’s not.”

Also Read: Here's What Protesters Were Chanting During the #DemDebate

Booker went on to criticize how the immigration debate often relied on pitting immigrants against each other. “Some are from s–thole countries,” he said, uncensored by CNN and referencing a phrase used by Trump, “and some are from important countries. We need to reform this whole immigration system.”

Earlier during the debate, protesters had chanted “three million deportations” — the number of deportations under the Obama administration between 2009 and 2016 — while Biden responded to a different question about the U.S./Mexico border. The protesters were part of the Movimiento Cosecha, a coalition of immigrant-rights activists, who said in a statement provided to The Wrap, “Any candidate who claims to be against Trump’s raids and family separations needs to make a real commitment to protection [sic] all 11 million undocumented immigrants.”