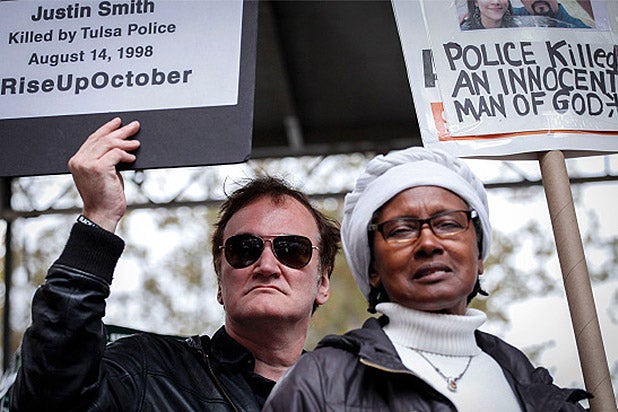 An organization representing over 16,500 border patrol agents are joining in the national police boycott of director Quentin Tarantino.

“We stand strongly in support of our brothers and sisters in uniform who have called for a boycott of Tarantino movies,” said NBPC president Brandon Judd. “His hateful words, spoken just four days after a NYPD officer was gunned down in East Harlem, will only embolden those who would do harm to police officers. Aren’t we a big enough target already?

Reps for Tarantino and “The Hateful Eight”‘s distributor The Weinstein Company did not immediately return TheWrap’s request for comment.

Read the full post from the official NBPC site:

Leaders of the National Border Patrol Council, the union that represents more than 16,500 men and women who protect our nation’s borders, expressed their outrage at Quentin Tarantino, who last Saturday joined a New York protest of police brutality and called police “murderers.” The Hollywood filmmaker’s words and actions are “a disgusting and dangerous insult” to all law enforcement officers, said NBPC president Brandon Judd. The Border Patrol, he pointed out, is one of the nation’s largest law enforcement agencies. “We stand strongly in support of our brothers and sisters in uniform who have called for a boycott of Tarantino movies,” Judd said. “His hateful words, spoken just four days after a NYPD officer was gunned down in East Harlem, will only embolden those who would do harm to police officers. Aren’t we a big enough target already?” The NBPC is proud to join the nation’s five largest police unions, all of which have called for a boycott of Tarantino’s work, including his upcoming movie, “The Hateful Eight.” Judd said he agrees wholeheartedly with the Los Angeles Police Protective League, which issued a statement saying “Tarantino took irresponsibility to a new and completely unacceptable level.”