But he’s better known as a trumpet player: We first meet Chet Baker (Ethan Hawke) reaching out to a hallucinatory tarantula crawling out of his trumpet in an Italian jail in 1966. Then we’re yanked back to black-and-white 1954, at the Birdland club in New York City. Baker’s about to play his first double bill with Miles Davis (Kedar Brown) and Dizzy Gillespie (Kevin Hanchard). And he kills it.

But Baker is a heroin addict. Even after his manager drops him (“Jazz is changing, Dylan went electric …”), the musician doesn’t feel entirely ountil his dealer has some goons send him a bloody message. Baker’s teeth are knocked out. He can’t play anymore. And that’s when things really go south.

Writer-director Robert Budreau, making his feature debut, portrays Baker as having a friendly relationship with heroin. When explaining to his girlfriend, aspiring actress Jane (Carmen Ejogo, “Selma”), how essential the trumpet is to his very being, Baker tells the story of how he went to audition for Charlie Parker, another addict, and that the Bird chose him without even trying out the others. Regarding their shared pastime, Baker says, “He never hurt anybody but himself. Just like me.” Later, Baker gets clean, and then talks his way in to another chance to play for Miles and Dizzy at Birdland. But he’s terrified to play sober.

Hawke is terrific as the jazz legend, so soft-spoken that he sometimes appears a little frightened of the people around him. His resemblance to Baker helps, and somehow Hawke even seems to have aged with the raggedness of an addict. He sings — wonderfully, if not with Chet’s flourishes — and manages to make Baker confident yet self-effacing. And for once, the actor isn’t irritating.

See Video: Ethan Hawke Calls Out Hollywood on Gender Inequality: 'The Movie Business Is Such a Boys Club' 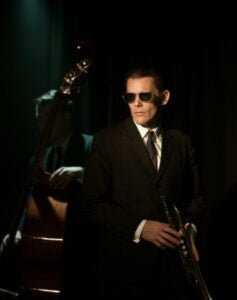 “Born to Be Blue” documents not only Baker’s addiction and comeback, but also the daddy issues that perhaps lent to the man’s lack of ego. When he brings Jane to his parents’ farm so he can practice trumpet with his dentures in a quiet setting, his father (Stephen McHattie) greets them by immediately referring to her as a “colored girl.” And when the couple leaves, he responds to Baker’s gift of a favorite record that his dad used to sing by remarking on his son’s version: “But why’d you have to sing like a girl?” When Baker gets his back up and says that at least he never quit, Pops answers, “But I never embarrassed my family.” Spying these exchanges, Baker’s drug habit seemed inevitable.

Budreau makes the film a romance as well as a biopic, with Chet and Jane at the center of any adversity swirling around them. They’re loving, but not without problems; his neediness and vulnerabilities and her disappointments and desire for some freedom to pursue her professional interests are forces ever threatening to break them apart. Ejogo’s put-upon and sometimes brokenhearted woman is one you’ll care for as much as Baker’s fallen star.

The film’s arc, like so many offerings of the genre, is unavoidably “Behind the Music,” so we see Baker pulling himself out of a hole and relearning to play his instrument well enough to sway the industry into giving him another chance. This break, however, is not without snafus, a little more tension tossed into an already heightened situation.

Regardless of whether these potential setbacks really happened or not, they’re utterly believable: No matter how great the talent, addictions and crutches both past and present constantly threaten to bring them down. On-screen text at the film’s end lets you know that heroin wasn’t a direct cause of Baker’s death. (Look up his obituary for a more accurate description.) But even more of a surprise is how much that hauntingly deadly drug may have helped him succeed.