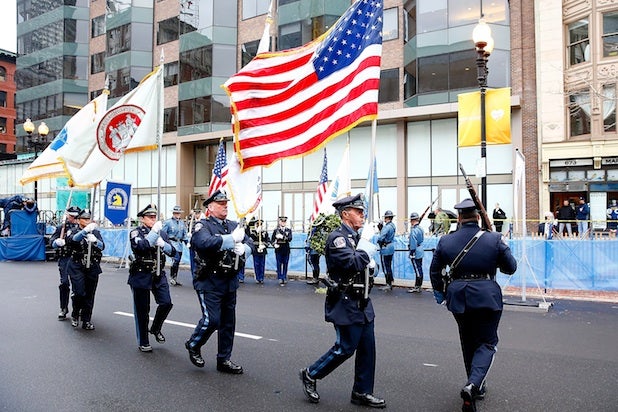 Tuesday marks the one year anniversary of the tragic events of April 15, 2013, when two bombs went off during the Boston Marathon. The broadcast news and cable news networks have programmed their coverage to highlight the events and its anniversary.

As a result of the Boston bombings, three people were killed and more than 260 people injured. That would launch a manhunt for the men responsible for the attack: Chechen brothers Dzhokhar and Tamerlan Tsarnaev.

Ultimately, Tamerlan was killed and his heavily injured brother was captured, but not before they allegedly killed an MIT police officer, carjacked an SUV and initiated an exchange of deadly gunfire with police in Watertown, Mass.

One year later, there are memorials planned, survivors are telling their stories and we’ll go back to analyze the day’s events and what we’ve learned about them since. Specifically, between 2:30 p.m. and 3 p.m. EST, a flag-raising ceremony and moment of silence will be held at the marathon finish line — to mark the time and place where the two bombs exploded a year ago.

See below for how the broadcast and cable networks are covering the anniversary (updated as information becomes available):

ABC
— ABC News: It will air a special report to mark the anniversary of the Boston marathon bombing on Tuesday from approximately 2:35-2:55 p.m. ET. “Good Morning America” and “This Week” anchor George Stephanopoulos anchors from New York and will be joined by ABC News consultant Ray Kelly in his first television appearance on ABC since joining the network. “Nightline” and “Good Morning America” Weekend Edition co-anchor Dan Harris will also report live from Boston.

– ABC News Digital: It will offer a look at the hero survivors and their uplifting stories of strength and perseverance through images and video over the past year of recovery, as well as, roll out a series of original videos around the anniversary and showcase the most iconic moments from the tragic day. ABC News Digital will air live online at the ABC News website.

– CBS Evening News anchor and managing editor Scott Pelley will broadcast live from Boston and cover the moment of silence at the Boston Marathon finish line honoring the victims and survivors of last year’s bombings. He’ll also revisit the investigation and speak with the federal investigators who led the manhunt for the Tsarnaev brothers.

– Correspondent Jeff Glor will cover the commemorative events of the day.

– National correspondent Chip Reid will sit down with “Danny,” the carjacking victim who helped lead police to the two suspects.

– CBS correspondent Elaine Quijano will speak with veteran Boston Globe photographer John Tlumacki, who has chronicled the recovery of a mother and daughter who were both wounded by the blast.

CNN
— Cable news network will provide coverage of the anniversary throughout the day.

– Brooke Baldwin and Jason Carroll are in Boston

– CNN will broadcast the moment of silence this afternoon.

MSNBC
— Will be airing the moment of silence this afternoon live.

NBC
— NBC News will provide a special report on the broadcast network during this afternoon’s tribute event marking the anniversary of the Boston Marathon bombing. Brian Williams will anchor from New York, joined by Ron Mott in Boston.

– NBC Nightly News is planning reports from its team that covered the bombing last year: Anne Thompson on the anniversary and Tuesday’s events; Pete Williams on the approaching trail of Dzhokhar Tsarnaev; and Rehema Ellis on Team MR8, a group of 100 people from around the country who are running this year’s marathon in memory of 8-year-old victim Martin Richards.

– NBCNews.com has a number of original stories and multimedia features all curated on NBC News’ Boston Bombing Anniversary site.