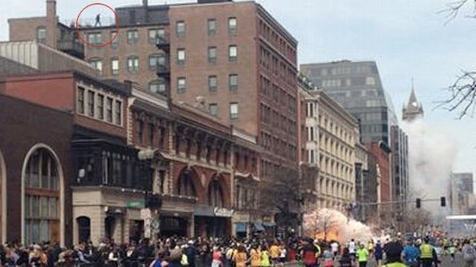 All it took was one image of a silhouetted man on a roof to spawn one of many conspiracy theories about the Boston Marathon bombers.

Speculation is rampant about a Saudi man's reported interrogation and the fact that the attacks fell on tax day as well as Patriots' Day, which celebrates the start of the Revolutionary War. But no one, at this point, seems to know anything.

But true-crime shows have trained us all to think of ourselves as armchair detectives. And so online searches for "man on roof" or "mystery man on roof" took off Tuesday as an image of a man atop a building near one of the two explosions spawned Twitter theories that he was somehow involved.

The image (above) spread quickly after it was posted by several users, including a parody account of singer Frank Ocean. The tweet from @Fraank_Oceaan — “Who’s that guy on the roof?? #BostonMarathon #PrayforBoston” — has about 3,000 retweets, and counting.

Other tweeters suggested the man was overseeing the attack, though there's no telling if he could even see the second explosion from where he stood.

Major news media outlets got into the act as well, covering the "man on roof" from the angle that the image going viral was in itself news. That allowed them to point out that others believed he might be involved, without going out on a limb themselves.

The Drudge Report linked to a New York Daily News story about the "man on the roof," and ABC News ran another story.

Though ABC News interviewed Dan Lampariello, the Boston college student who caught the image of the man on the roof, the story focused on what he witnessed during the bombings.