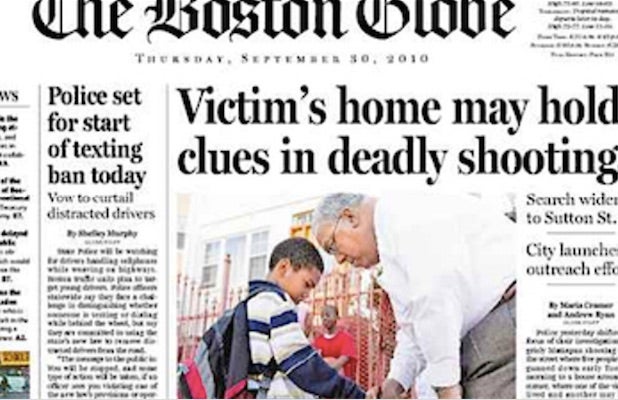 The Boston Globe laid off two dozen full-time and part-time staffers on Thursday and accepted 17 buyouts, according to a memo written by editor Brian McGrory.

“Your performance, journalistically, has been something to behold through this period of uncertainty,” he wrote. “And stay tuned. Some of our best work will be on display in the coming weeks.”

McGrory credited the laid off staffers with the paper’s success and said once the layoff process ends, there will be “much to discuss.”

“In the meantime, please know that there were no good choices to be made today — only necessary ones,” he continued. The latest layoffs come after a previous round occurred in 2014.

Revenue at the Globe is flat, CEO Mike Sheehan said in May. He predicted the paper would be lifted from “tremendous financial pressure” when it leaves its current headquarters on Morrissey Boulevard in 2017.

The company has made high-profile hires recently, including former Politico executive editor Rick Berke in March.

The Globe layoffs come amid recent layoffs of several high-profile sports columnists at The New York Daily News and the the anticipated layoff of up to 50 staffers at The Los Angeles Times.

This was a tough day in this newsroom. A layoff process began this morning and won’t be fully over until early next week, though the vast bulk of the departures occurred today. In all, we’re parting ways with nearly two dozen part- and full-time staffers, some relatively new, some who’ve been here a long time. Another 17 newsroom members accepted the recent buyout and have left already or are planning to leave in the coming weeks. These are sizable numbers, but we’re facing unfathomably difficult forces in the news industry. That, you already know.

We’ve worked beside these departing colleagues day after day, sometimes year after year. They’ve made us look good from the copy desk, traveled the world chasing major events, been pioneers in digital journalism, and brought national recognition to our features sections. They’re also our friends.

There’s little that a newsroom has that’s more important than its reputation, and these colleagues have helped burnish ours — something that doesn’t happen overnight, but over decades. Which is to say that not only are their contributions deeply valued, their impact is deeply rooted.

Going forward, we have a big, talented, ambitious staff, among the absolute best in the business. We’ll continue to invest in the aspects of this organization that will allow us to flourish, just as we need to be ever more creative in how we go about our work. There’s no time these days to stand still, and from everything I hear in the room, no desire to do anything like that. You know this already but I’ll say it anyway: The Boston Globe is incredibly well positioned to thrive.

By the way, your performance, journalistically, has been something to behold through this period of uncertainty. And stay tuned. Some of our best work will be on display in the coming weeks.

After the process ends, there’s much to discuss, and we will. In the meantime, please know that there were no good choices to be made today — only necessary ones.