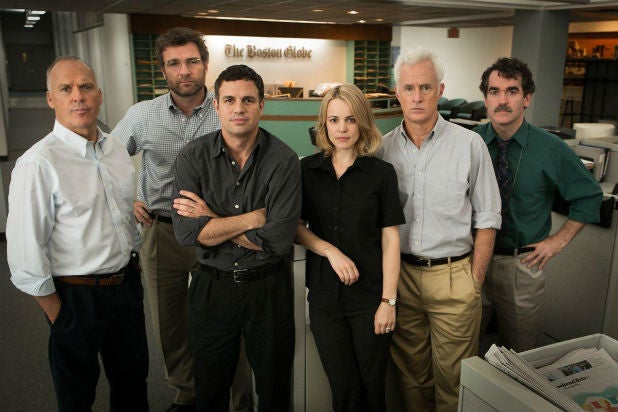 The Boston Globe, First Look Media, Open Road Films and other partners have announced the creation of the Spotlight Investigative Journalism Fellowship, named after the Globe’s groundbreaking investigation into sexual abuse in the Catholic Church.

“Spotlight,” of course, is the name of the feature film depicting the paper’s Pulitzer Prize-winning investigation. The fellowship will fund The Boston Globe $100,000 for investigative journalism.

Participant Media is also funding the fellowship that will be awarded to an individual or team of journalists in order to provide resources and support to pursue an in-depth investigative story with the opportunity to publish it in The Boston Globe.

“The Boston Globe has an unwavering commitment to produce high-impact investigative stories that pierce secrecy and shine a light on issues, individuals, and institutions to expose the truth,” saidBoston Globe editor Brian McGrory.

“Whether it is the Spotlight Team’s investigation of the Catholic Church in 2002; its relentless reporting of the criminal dealings of James ‘Whitey’ Bulger and his ties to federal law enforcement; or its most recent report on hospitals where doctors are running two surgeries at once, accountability reporting is an integral part of The Boston Globe’s daily coverage.”

“Without the brave and tenacious work of the reporters on the Spotlight Team, the true scope of the story might never have been told,” said Tom Ortenberg, CEO of Open Road Films. “Pursuing a story to its end takes time and resources not often available to journalists; the fellowship will enable another important story and critical issue to reach citizens.”

“What Spotlight does so beautifully is show the critical role that journalists play in helping society hold institutions accountable for their actions,” said Jonathan King, EVP of Narrative Films at Participant Media. “We’re proud to honor the work of the Spotlight Team and support the efforts of investigative journalism through the fellowship.”

“Good storytelling can be engaging and provocative but its real power is ignited when a unique perspective on an issue inspires people to create change,” said Michael Bloom, president of First Look Media. “We are deeply committed to supporting fearless investigative journalism at First Look Media through The Intercept, and are thrilled to support the Spotlight Team and the winners through this fellowship.”