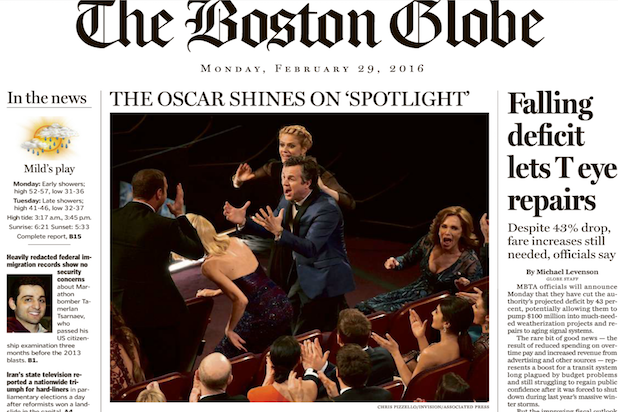 The Boston Globe announced another round of buyouts as the paper continues to shake things up in advance of a move to new downtown offices.

Globe editor Brian McGrory sent a memo to staffers that was obtained by Poynter.

“The Globe’s numbers aren’t as good as our words (or photos, videos, and graphics). So we need to take down costs across the company, an exercise that virtually all other news organizations in the nation, legacy and digital-only, are focused on right now. Other parts of this building are doing this as well,” the memo said.

The staff reduction is the third time the paper cut headcount in the past three years. The Globe is reportedly offering employees two weeks of pay for every year of service, capped at one year’s pay. The paper is planning to move its offices to downtown Boston.

The Globe enjoyed some Hollywood fame this year from the Oscar-winning film “Spotlight,” which is based on the paper’s investigation of sexual abuse in the Catholic Church. The positive press the Globe has received from the movie’s success hasn’t helped its bottom line, though.

“Everybody in this room should be prepared for their jobs to change in ways that may be significant. Change is as exhausting as it is exhilarating, and some people have had enough,” McGrory’s memo continued. “We respect that, and are offering this enticement now so we can all be prepared going forward. To be very clear here: This will be the last buyout before the move downtown.”