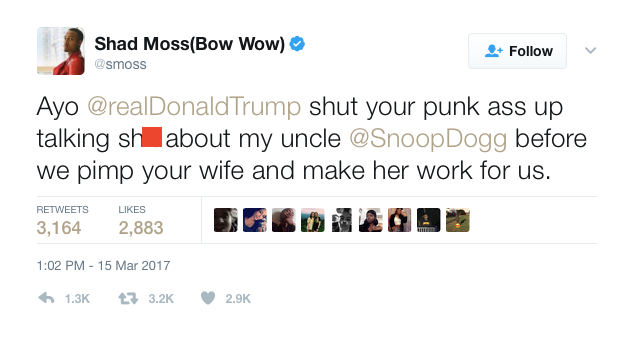 On Wednesday, the president took to Twitter to slam “failing” rapper Snoop Dogg, who this week released the video “Lavender,” which features Snoop Dogg shooting a Trump lookalike with a toy gun.

“Can you imagine what the outcry would be if @SnoopDogg, failing career and all, had aimed and fired the gun at President Obama? Jail time!” tweeted Trump.

In the video, directors Jesse Wellens and James DeFina depict an America where everyone’s a clown, including president “Ronald Klump.” After Klump holds a press conference to announce the deportation of all dogs, Snoop chains up the Clown-in-Chief and shoots him with a fake pistol.

Since the video was released, it has drawn criticisms from U.S. senator and hip-hop fan Marco Rubio, who said that the rapper should be “very careful” about such depictions. Trump’s attorney, Michael Cohen, also registered his displeasure with the “Lavender” video, telling TMZ: “It’s totally disgraceful, Snoop owes the president an apology. There’s absolutely nothing funny about an assassination attempt on a president.”

Bow Wow’s dig at Trump’s wife Melania comes two months after she reached a settlement with a blogger, Webster Griffin Tarpley of Maryland, who suggested that she might have worked as an escort before becoming First Lady.

Trump also sued Tarpley and the Daily Mail in September, claiming that a story saying that Trump worked for a modeling agency where the models also worked as escorts, inaccurately painted her as a sex worker.

The White House has not yet responded to TheWrap’s request for comment.