The big blue legs of James Cameron’s "Avatar" have continued their epic sprint into week seven, dropping only 19 percent at the domestic box office Friday and once again leading all comers with $7.3 million, according to studio estimates.

The Fox-distributed 3D film is expected to finish the weekend with nearly $593 million in North American gross, leaving it about $7 million shy of "Titanic’s" $600 million all-time domestic record. It’s also on the cusp of passing the $2 billion mark worldwide… which is an impressive feat, regardless of the movie’s ability to charge premium 3D ticket prices.

In second place, Mel Gibson’s return to feature-film stardom after an eight-year absence yielded a $5.6 million opening for Warner R-rated thriller "Edge of Darkness," with the film performing just slightly above the studio’s lukewarm estimates.

Budgeted at $60 million, adapted from a 25-year-old BBC miniseries and produced by GK Films, "Edge" is pacing for a $16.5 million weekend. Warner has domestic distribution rights for the movie.

Overall, the domestic box office was off about 8 percent from the comparable Friday a year ago, which led into Super Bowl weekend.

Among holdovers, Fox family film "The Tooth Fairy" held up well, dropping only 36 percent from its premiere a week earlier and grossing $2.3 Friday.

Dropping big, however, was Sony/Screen Gems killer-angels movie "Legion," which took in $2 million Friday for a 70 percent decline.

Also, CBS Films debut "Extraordinary Measures" fell out of the top 10 in its second Friday, dropping 63 percent to $760,000.

It’s a phenomenon that, this January at least, is as rare as a blue moon: “Avatar” won’t be breaking any records this weekend.

That won’t much help Mel Gibson’s return to the big screen, however.

Already the all-time leader globally and internationally, "Avatar" still trails “Titanic” by just under $40 million for the domestic revenue record of $600.8 million, according to Box Office Mojo data. Even if James Cameron’s epic sustains this run — the film declined only 18.3 percent last weekend — it’ll exit this weekend roughly $12 million short.

Still, “Avatar” is once again expected to rule the domestic box office in its seventh week. The consolation round pits the Gibson thriller “Edge of Darkness” against the Kristen Bell romantic comedy “When in Rome."

Warner Bros. "Darkness" is adapted from a 25-year-old BBC series by screenwriter William Monahan, and features Gibson in his first starring role since 2002’s “Signs” and “We Were Soldiers.” The film will open in 3,066 theaters and is being tracked to complete the upcoming three-day weekend with around $13 million-$14 million.

Warner officials — who control domestic distribution for the film — predict that solid word-of-mouth will produce some staying power for “Darkness,” which will need it to offset a reported $60 million production budget (it’s currently scoring a decent “62 percent fresh” score on Rotten Tomatoes).

Of course, since he last led a major motion picture, Gibson’s Q Score has taken a bit of a beating, largely due to his religiously divisive film "The Passion of the Christ" and his high-profile drunk-driving arrest in 2006.

“In this case, it’s the movie itself that drives (ticket-buying),” remarked Warner distribution president Dan Fellman, downplaying the significance of Gibson’s public-image problems.

“People are very used to seeing Mel Gibson in that kind of role,” added another distribution president from a rival studio, noting that a plot featuring Gibson trying to uncover and avenge his daughter’s murder suits the actor.

Perhaps not so coincidentally, Fox used the comparable weekend on the January calendar last year to debut the similarly themed Luc Besson film “Taken,” which starred Liam Neeson as a dad trying to solve/avenge his daughter’s kidnapping.

That movie, which was budgeted at $25 million, debuted at No. 1 in North America with $24.7 million in box office and ultimately grossed $226.8 million worldwide. 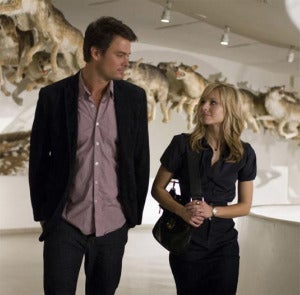 Meanwhile, Disney’s PG-13-rated “When in Rome,” starring Bell alongside Josh Duhamel, Anjelica Huston, Will Arnett and Jon Heder, will open in 2,457 theaters and is projected to debut in the $10 million range.
“Overall, the intent to go to the movies is tracking a bit low this weekend, so that’s going to affect everybody’s numbers,” said Disney distribution president Chuck Viane.
That includes holdovers “Sony/Screen Gems horror movie “Legion” and Warner post-apocalyptic Denzel Washington movie “Book of Eli,” which placed second and third respectively at the North American box office last weekend with grosses of $17.5 million and $15.7 million.
With "Avatar" in the market for another five weekends, the goal for rival distributors remains the same.
"It’s going to be a tough fight for second place," Viane noted.
x
Looks like you're enjoying reading